TULSA, OK (USA) -- It’s not often God comes up at Board of Adjustment hearings. Tuesday was an exception. 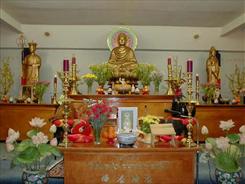 After a nearly hourlong public hearing sprinkled with discussions of religion, the board voted 4-1 to give an east Tulsa Buddhist temple conditional OK to build a 49-foot-tall granite statue of Buddhist goddess Quan Am.

"I have no problem with it, when it comes down to it,” board member Jim Stephens said before casting his vote.

Board member Mike Tidwell voted against permitting Tam-Bao Buddhist Temple, 16933 E 21st St., to amend its previously approved site plan, saying the proposed location of the statue — 300 feet from 21st Street — was too close to the road.

Since the city’s zoning code sets no height restriction on agriculturally zoned districts, the board’s charge Tuesday was to determine whether the statue, to be erected on an 8-foot pedestal, would be in harmony with the spirit and intent of the zoning code and not injurious to the neighborhood. It was not asked to determine the statue’s merits.

As board member Clayda Stead noted, "This board is generic when it comes to religion.”

Tuesday, however, the issue was hard to avoid.

Carole Carner said she opposed the statue because it would not be in keeping with the city’s development plans.

"We decided a statue of this proportion would just not be fruitful for and would prohibit the progress that we have been trying to plan in east Tulsa,” Carner said.

When pressed by board Chairman Frazier Henke to clarify whether her objection was based on its height or the fact that it would be a Buddhist statue, Carner said: "Well, a Buddhist statue going up to the sky, yes.”