Years of work paying off for Buddhists' retreat

Followers celebrate completion of facility's first phase HEMPSTEAD, TX (USA) -- Amid echoes of drums, bells and Buddhist chants, a monk donning a red and yellow robe raised a golden key and led two followers to open the door of the meditation hall in front of a crowd of 1,200. 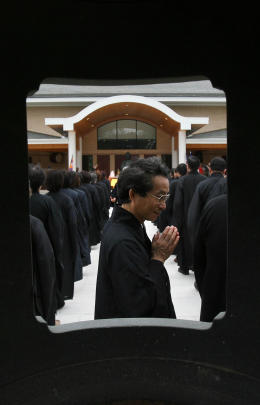 The hall, a hybrid of Eastern and Western architecture, is one of numerous structures that opened Saturday in the initial phase of the American Bodhi Center, a 515-acre Buddhist retreat in a wooded part of Waller County.

It has taken $10 million in donations, nearly a decade of planning and three years of construction to open the center, one of the nation’s largest Buddhist developments.

Saturday’s ribbon-cutting coincides with two other milestones for the Houston-based Texas Buddhist Association that built the center. It was the 2,553rd birthday of Siddhartha Gautama, the founder of Buddhism, as well as the local organization’s 30th anniversary.
A special occasion

The group, which has a congregation of about 1,500 families, has held services at its Jade Buddha Temple, 6969 Westbranch.

“This is a very special occasion, but I am not feeling ecstatic,” said the Rev. Hung I, the temple’s abbot and the visionary behind the project.

Hung I described the center as a new beginning in the association’s arduous journey to “help people return to what’s important in life.”

The center represents a departure from typical traditional Buddhist establishments, which are characterized by elaborate Asian architectural designs and an abundance of religious objects. Here, the focus is on the center’s functionality and accessibility.

“We wanted things to be simple, useful and comfortable because we are serving people of today in the West,” said the Rev. Jan Hai, a co-founder of the association who started the Buddhist mission in Houston in 1978.

Surrounded by trees and two lakes, the mostly neutral-colored buildings are spacious with ample natural light. The meditation hall is encircled by an inner corridor and an outside covered porch for walking meditation for those who find sitting cross-legged challenging.

The developed area takes some 30 of the 515 acres, including a dining hall, an enclosed pavilion for tea and meetings, 40-bed gender-specific dormitories, log houses for family retreats, and a memorial hall to house the ashes of up to 2,000 people. Long, covered corridors connect some of the buildings to allow access in all weather.
More is planned

The site also features camping grounds, a children’s playground and an outdoor basketball court. The bulk of the property is kept as a nature reserve.

Within three to five years, Hung I said, a grand hall for ceremonies and lectures, a conference complex and a Zen garden should be built, and a Zen forest would be developed. Plans also call for bird-watching sites and an expanded system of walking trails, and, in the long run, a Buddhist college.

The facility is open to the public. Waller County Judge Owen Ralston, who joined the ribbon cutting, said the “ecologically-minded” association tried hard to fit in and to use local contractors.

“They stressed to us from the beginning they would put something in the county that all citizens could use,” Ralston said.
TOP