Lexington, KY (USA) -- In an office at The University Press of Kentucky, one would never expect to find the birthplace of a Buddhist community. But in the cluttered room littered with prayer flags and adorned with stunning pictures of Tibetan mountains and monasteries, Richard Farkas eases into his chair and speaks easily about his faith. 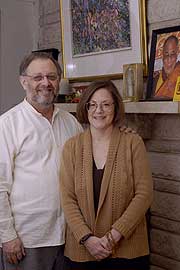 << Mark Ashley - Richard Farkas and his wife, Julie Farkas, open their home weekly to anyone interested in Buddhism. Richard Farkas is the founder of the Tibetan Buddhist Community of Lexington, and he wants to see it grow.

Farkas is the founder and self-proclaimed facilitator of the Tibetan Buddhist Community of Lexington. For more than a year, his small community of practicing Buddhists and those interested in Buddhism have come together to learn and grow in the Buddhist faith in a small shrine room inside Farkas' home, decorated with traditional Tibetan and Buddhist items such as candles, rugs, paintings of the Buddha and pictures of the Dalai Lama.

The fact that the Tibetan Buddhist Community of Lexington has survived for a year is very significant, Farkas said. According to the U.S. State Department's International Religious Freedom Report for 2004, only 2 percent of the U.S. population is Buddhist.

The local community meets every Saturday morning at Farkas' home. Attendance has been as high as 30, but the average is 10.

Farkas has studied Buddhism for more than 10 years and has been a practicing Buddhist for seven. His faith has grown along with his interest in Buddhism, and he has traveled to Tibet twice and has met the 14th Dalai Lama.

"Buddhism is an inner thing," he said. "It's a personal thing."

Buddhism, he said, is a faith based on "noble truths" that describe the suffering of people during day-to-day life but assert that suffering can be overcome through the acquisition of wisdom, living ethically and displaying mental discipline.

The group is becoming more active in Lexington and surrounding counties.

Members were involved in a recent cultural event at Berea College, observed March 10 as the anniversary of the Tibetan uprising in 1959 and the exile of the Dalai Lama, and participated in a candlelight vigil for the citizens of Tibet before the 2008 Beijing Olympics.

During a normal Saturday service, Farkas leads Buddhist prayers and brings forward any announcements in the Lexington Buddhist community. Then the group views a video on facets of Buddhism. The group concludes its meeting with questions and prayers.

One Saturday of each month, a Buddhist geshay attends to lead the group in chants, prayers and teachings from his studies. The title of geshay is given to those who have studied the Buddhist faith for 15 to 20 years, Farkas said.

He said his study of Buddhism has affected his life.

"I try to control my mind, my thoughts, more. I try to think about something before I do it or say something," he said. "The greatest benefit of studying Buddhism is the fact that because of karma, the law of cause and effect, we can actually do something about the outcome of our lives, rather than leaving it to fate or to something else that we have no control over."

P.P. Karan, a professor of geology at the University of Kentucky, has been attending the gatherings at Farkas' house for a year. Though not a practicing Buddhist, Karan said that his interest in the Buddhist faith and the Tibetan culture stems from his research of the Chinese occupation of Tibet and its effects on the environment.

"I think it's a great diversity dialogue, a way to further understanding and a way for people to learn about a culture that's disappearing," Karan said.

A Tibetan man named Lhokpa has attended the meetings once a month as a translator for the geshays.

A Louisville resident, Lhokpa said Farkas' community is an excellent outreach program that accommodates Buddhists living in Louisville, Lexington and the surrounding areas.

When asked about plans for his community, Farkas said his main concern was growing the number of followers who attend the Saturday meetings.

"We also need to find some other place to meet," Farkas said with a laugh. "Those are the goals of every dharma center: to expand and incorporate."