Buddhist monk says U.S. can benefit from example of monastic

Austin, Texas (USA) -- When I visited with Venerable Cintita recently, I was eager to hear about his experience in Myanmar where he was ordained as a bhikkhu, or monk, last year. I'd known Cintita for years as Kojin, a priest at the Austin Zen Center, and was curious to learn why he left the Soto Zen tradition for Theravada Buddhism and why he believes a strong monastic community in the U.S. would benefit American society. 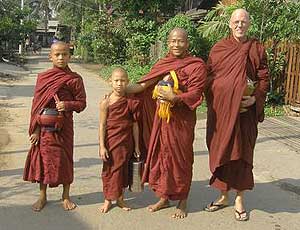 << Bhikkhu Cintita, right, stands with monastic novices and Ashin Paññasiha, third from left, in Myanmar. In the 85-percent Buddhist country, monks go on morning alms rounds to receive their meals from lay people, a humble undertaking that inspires 'a culture based on generosity,' says Cintita.

We sat on the sun-bathed deck of Sitagu Buddhist Vihara, the sprawling monastery southwest of Austin where Cintita, 60, now lives and teaches. He shared stories of being an American monk among lifelong Burmese Buddhists and showed me pictures of the people he'd encountered.

But I was distracted. My mind kept returning to food. It was only 1 o'clock, and I knew that Cintita had already eaten his last meal of the day.

Not eating after noon is one of the many rules Cintita now adheres to. Monks take a long list of vows handed down by Buddha. They eschew luxury. They are celibate and do not own property or acquire money. They shave their heads and wear simple maroon robes.

I know from my years covering religion that people who simplify their lives and live to serve others tend to feel happy and liberated.

Still, it's hard for most of us, especially here in the West, to imagine adopting such an ascetic lifestyle.

This is precisely why we would benefit from having monks in our midst. Learning about Cintita's lifestyle made me consider my own mindless afternoon snacking, made me question my own level of compassion and generosity.

His year in Myanmar, the largest country — and one of the poorest — in mainland Southeast Asia, showed Cintita the positive effect monasticism can have on a society. Myanmar, formerly known as Burma, is about 85 percent Buddhist, and the roughly 500,000 monks are completely dependent on lay people for their food, shelter, clothing and other essentials.

Monks serve the community through education, social service and counseling, but they are reminded of their vulnerability as they make their morning alms rounds, going to lay people's homes for their meals. They may not ask for food; they simply accept the offerings, usually rice and curry.

The tradition, Cintita said, inspires a "culture based on generosity." Even the poorest of families, he said, eagerly give food.

The ritualized interaction also nurtures humility and reverence among the lay people who bow before the monks. They're bowing to the robes, not the person, Cintita said. The monastic lifestyle allows monks to pursue spiritual understanding Buddhists associate with wisdom and compassion — ideals worth bowing to.

In Myanmar, he said, monks are "the most visible sign of Buddhism."

And this is how Cintita believes monasticism, whether Christian or Buddhist, can help Americans find their spiritual moorings.

"Monastics stand for the laity (and for each other) as exemplars and also as reality checks," he told me. "As such they have a subversive influence on the laity, to curb its natural tendency toward unskillful indulgence of various forms.

Basically monastics live simple no-frills lives, but generally do so joyfully. They also tend to exemplify ... wisdom and compassion in their lives. Their presence encourages reflection that helps people get their values straight."

Before he embraced Buddhism, Cintita was John Dinsmore, a divorced father of three with a successful career in computer science. Successful, as he has written on his blog, but not satisfactory. In midlife, he found himself drawn to Japanese Zen, which emphasizes the practice of meditation. Ordained as a Soto Zen priest in 2003, he took the name Kojin Hosen and served at the Austin Zen Center.

But monasticism in the Japanese Zen tradition left room for interpretation. Some monks were celibate. Some weren't. Some had property. Some didn't.

Questions nagged him: What am I? What is this ordination?

"It became very confusing to me," he said, "because every Zen priest had a different idea of what it is."

Privately, he took the traditional monk's vows — which included being celibate and not acquiring wealth — and began visiting the Sitagu monastery to seek advice from the abbot.

In 2008, he decided that in order to fully embrace monasticism, he needed to re-ordain in the Theravada tradition and live in a community where the rules for monks were more clearly defined.

This led him to Myamar. And eventually to the idea that this wasn't just a private spiritual journey. That this ancient tradition from the East could offer something useful in the West.

Cintita wants to see monasticism thrive here and believes the best of Buddhism can be an antidote to our "relentless self-seeking behavior," our materialism and unhappiness. As Cintata sees it, America is struggling with a spiritual crisis, trying to regain — or find — its spiritual grounding.

He hopes to see more Westerners follow his journey to monasticism, but he also recognizes that addressing spiritual needs in the U.S. is not only a job for Buddhist monks.

"If I inspire someone to become a Christian monk," he said, "that's every bit as good as inspiring them to be a Buddhist monk."