KANNAPOLIS, NC (USA) -- From the outside, the building at 1602 Lane St. looks very much like the Protestant church it used to be. 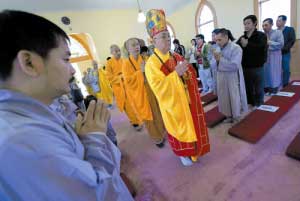 Walking in, after leaving your shoes outside, you’ll notice that the pews have been replaced by long cushions.

The first thing to draw your eye, however, is an immense golden statue of Buddha. Flanked by two umbrellas, it indicates unequivocally that the modest Calvary Presbyterian Church has been transformed into something rather exotic for these parts — a Buddhist temple.

Buddha taught that the world is suffering, and the religion of Buddhism teaches freedom or liberation from suffering.

Sunday, Jan. 23, is a special celebration of the day when Buddha found enlightenment under the Bodhi tree - as well as the yearly ancestor memorial service and the temple’s first birthday celebration.

Outside of the church is an altar with piles of fruit and other offerings.

After leaving my shoes outside the door, I enter the temple, happy to be wearing wool socks on a chilly day. My informal guide to the service is Judith Felson, a member of the Tinh Tam congregation who grew up in Salisbury but who now lives in Mint Hill. As nearly as I can tell, she, photographer Sean Meyers and I are the only non-Vietnamese people attending — which isn’t surprising since services are conducted in Vietnamese.

Judith has been a Buddhist since the 1970s, she says. She attends the Kannapolis temple regularly and has taken her Refuge Vows, promising to adhere to the Five Precepts: to refrain from harming living creatures, stealing, false speech, sexual misconduct and intoxicants. Those like Judith who have taken the vows wear gray robes designed to fade — “as we fade our egos and diminish ourselves when we are in the temple,” she explains.

She knows I’m nervous but sets my mind at ease. The people here, she assures me, are non-judgmental, “close-knit, warm, giving and loving.”

I’ve already met the abbot, Bhikku Thich Tam Khanh. A “Bhikku” is a fully ordained Buddhist monastic, committed to living a simple, meditative life. Master Tam Khanh, who was ordained at age 10, cannot marry and receives no pay. He lives on the first floor of the church in spartan quarters.

His special assistant is Dieu Le-Thi Thi Tu, who came from Connecticut, as Master Tam Khanh did, in order to start the church.

When the temple opened about a year ago, even the Vietnamese in the Kannapolis area were surprised, Thi Thi says. She believes there are only about 10 Buddhist temples in the whole state, with most of them in Charlotte.

Originally from Vietnam, Thi Thi lived in New York for 30 years. A home health care nurse in her regular job, she is devoted to helping Master Tam Khanh organize the Kannapolis church. Since Thi Thi has been in this country longer than the abbot, she helps him communicate and takes care of some of the day-to-day issues involved in running a temple.

Master Tam Khanh, also originally from Vietnam — which is about 60-70 percent Buddhist, Thi Thi estimates — studied in Taiwan and later moved to Connecticut to work with a Bridgeport temple Thi Thi was involved with. Interested in moving to a warmer climate, he chose Kannapolis instead of Charlotte because he felt he could be of more service there.

Special guests of this service include three nuns, or bhikkuni, who are wearing yellow robes. They sit up front, easily recognizable by their shaved heads. I can’t help looking at them periodically throughout the service because they are so astoundingly still.

“Have you seen those nuns breathe?” Judith whispers.

The beginning of the 10 a.m. service is announced by the strike of a gong from the back of the church. Worshipers sit cross-legged on the cushions; more continue to filter in after the service is under way. The usual meeting time is 11 a.m., and apparently some people didn’t get the memo.

The national anthem of the United States is played, as well as the Vietnamese national anthem and the international Buddhist anthem. The special guest speaks for a good little while. Later, I get a summary of his message.

He’s talked about eight ways to build goodness. Doing good things is like making deposits into a savings account; you can build up a store of goodness. Good things will ultimately return to you. Take care of your parents; help the sick. In you, you have good and evil, but you can control them. You can increase the goodness, and the evil will subside in response.

“Does that makes sense?” I’m asked.

The congregation joins in the singing and chanting. I’m relieved that I can follow the words most of the time, though I have no idea what they mean. I enjoy the chanting, though.

After a short break, a flower offering dance is performed by Buddhist youth from High Point. The female dancers hold vases of yellow flowers and move gracefully to recorded music, with the gong sounding in the background.

Later, there is more chanting, to the beat of a drum. At times, it is reminiscent of Native American chanting; it also feels vaguely Celtic at times. The smell of incense wafts through the air.

Some people simply listen, without vocalizing, hands pressed together in prayer.

Near the end of the ceremony, around 2 p.m., the cake is cut, although it won’t be eaten until later. Some more words are said, which basically translate to the following: Wherever the people are, the Buddhist teaching will be there. If you practice daily, you will one day achieve enlightenment like him.

Then, we sing Happy Birthday. It’s in English, and I am happy to be able to participate energetically.

After the service, everyone goes to the social hall, where a meal has been prepared, a weekly custom.

There is more talking, more rituals before the meal. I am reminded of what Judith has whispered to me during the service, that after three hours of listening to a service in a language I don’t understand, sitting in traffic next week won’t bother me nearly so much.

Judith and I go through the line together, and everyone seems to want us to try everything. Even when we sit down with loaded plates, Thi Thi comes bearing more food. “Try this.”

It is all wonderful, and although I would swear I’m eating meat in some of the dishes, I’m not - it’s the magic of vegetarian cooking.

I sit near some youth who appear to be high school age, and I can picture them sitting in calculus class and going to basketball games.

I somehow feel both out of place and comfortable at the same time.

The temple holds services every Sunday, from 11 a.m.-3 p.m. Services include Sutra chanting and meditation, as well as a message from the abbot.

“Everyone can come here to meditate and pray to Buddha,” Thi Thi says. “Everyone has the chance to be enlightened.”

In March, those who are interested in meditation practice are invited to a weekly class conducted in English. It will begin on March 3 and will be ongoing, meeting Thursdays from 7-8 p.m. at the Tinh Tam Buddhist Meditation Temple, 1602 Lane St. The class will be taught by Master Tam Khanh.

“To meditate is to try to understand the nature of the mind and to use it effectively in daily lives,” Thi Thi says. “The mind is the key to happiness and also the key to suffering.”

There is no fee for the class, but donations are gladly accepted.