San Antonio, TX (USA) -- He cannot work, drive, eat after noon until the next morning, or speak to others unless he is spoken to first. 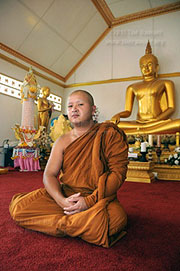 You have probably seen him in a yellow and maroon robe, a jivorn. He is neither your average exchange student nor Buddhist monk.

Surasit Mankongsakulkit, 24, also referred to as "Sid" was born in Bangkok, Thailand.

Mankongsakulkit lived with his parents and younger brother until he was 8 years old when his parents divorced.

After his parents divorced, he went to live with his father's sister and grandmother, never again to see his parents.

At 14, he began playing the drums. A year later he received a full scholarship to Triam Udom Suksa secondary school in Thailand. According to the University Council of Chulalongkorn University, it is ranked first in the country.

His passion for playing the drums, as Mankongsakulkit said, led him to earn first place in competitions and a full scholarship to Mahidol University's music department an elite school in Bangkok.

Mangkongsakulkit was in a two-year relationship and rejected the scholarship so that he could attend Assumption University in Bangkok with his girlfriend.

While attending Assumption University, he and his girlfriend ended the relationship, and at the end of his freshman year, Mankongsakulkit received a phone call from his aunt in Miami, who suggested he study in the United States.

Without thinking twice, Mankongsakulkit took the next plane to San Antonio where his aunt and uncle were to pick him up.

Master is the word Buddhist monks use to refer to their leader or higher authority.

Mankongsakulkit did not understand why his aunt and uncle were going to pick him up in San Antonio instead of Miami, but little did he know his life was about to change.

Upon his arrival in San Antonio, he was greeted by his aunt and uncle and taken to serve at his future master's birthday party.

He did not understand why he bowed to the master at the party, but out of nowhere, the Buddhist master said, "you will know later."

He and the Buddhist master talked, and the master told about Mankongsakulkit's past.

"I was like who is this guy and how did he know all about me," he said. "And that's when I knew I wanted to be just like him."

Mankongsakulkit was invited by Thanissaro Bhikko, his master, to become a monk, but before making any decision, he went to Miami with his aunt and uncle and attended the EF International Language School to improve his English. Though Mankongsakulkit seemed to be destined to be a monk, he thought about joining the Marines.

"I had talked to Marine recruiters and thought why not and give it a try," he said.

Mankongsakulkit had only met bad monks in Thailand but it was different when he met Bhikko. "If it wasn't for him I would have died already," he said.

"It was the biggest change in my life," Mankongsakulkit said.

Before becoming a monk, Mankongsakulkit learned and memorized the "Shanning," the procedure of ordination.

After two long years of intensive thought, he, received a phone call from his master and decided to become a monk.

Mankongsakulkit is a "Theravada" forest monk that follows the early Buddhism and Buddha, not the Dalai Lama in the Tibet.

"The life of a musician had taken me the wrong path. The reason I became a monk was because I wanted to practice, become a better person and discipline myself," he said. No longer able to pursue his passion in music, Mankongsakulkit is now pursuing a career in accounting.

"I learned from watching my master and what he did. You learn from your mistakes and that's what I have been learning from, my mistakes," Mankongsakulkit said.

It is going on three years since Mankongsakulkit devoted his life to Buddhism.

Life as monk prohibits him from civilian activities he once participated in and understood.

Mankongsakulkit's mission is to represent Buddhism to people in San Antonio and to educate them.

"I would like to guide them through their problems." "We as monks can tell you what direction you should go, but you are the one who chooses."