Twin Cities, Minn (USA) -- On Sunday May 8th His Holiness the Dalai Lama visited America's second largest Tibetan community based around the Twin Cities area in Minnesota. At the University of Minnesota's Mariucci Arena, the Dalai Lama first took part in a Medicine Buddha ceremony and later in the day held a speech on the subject of "Peace Through Inner Peace". 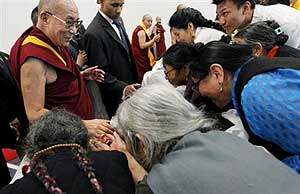 At the morning ceremony, which were to promote "personal and societal healing", around 6,000 people received blessings and took part in the cultural and spiritual ceremony lead by His Holiness, the Dalai Lama. To begin with he first talked about the roles of the different religions in today's society and underlined that all religions have the same potential for unbiased compassion.

To the large crowd, which included an estimated 2000 Tibetans, His Holiness emphasized the need for studying and practicing the Buddhist philosophy and advised that serious Buddhist practitioners should meditate on the four foundation of mindfulness: mindfulness of body; mindfulness of feelings; mindfulness of mind; and mindfulness of Dharmas, before he ended the ceremony by reminding the gathering that mere recitation of prayers is not enough and said that peace would not come through prayer; peace will come through action.

Before the afternoon's public address began, University President Robert Bruininks bestowed a doctorate of humane letters on the Dalai Lama, the highest degree available at the University of Minesota. After receiving this honorary degree, His Holiness began his speech, talking about the importance of educational institutions like the University incorporating secular moral ethics into the curriculum.

He said that the modern education system began over a thousand years ago in Europe and that, at that time, the Church took upon itself the role of promoting inner peace. Over the years, the influence of the Church declined as did family values. Therefore, now there was a need for the educational institutions to step in to teach people on inner values.

As the Dalai Lama's appearance in Minnesota coincided with Mother's Day, he also recalled the kindness of his mother and said that he learned from her about warmheartedness. He paid tribute to mothers as the source of affection and warmth in their children by saying that "by nature we all have the potential [for] warm-warmheartedness because we all come from our mother," he said. "We've grown up under mother's tremendous affection. We all have the same experience.

His Holiness also said he appreciated the University of Minnesota's effort in incorporating the study of spirituality. His visit also coincides with the official launch of the Tibetan Healing Initiative (THI) at the University's Center for Spirituality & Healing. The new THI initiatives will include research on the benefits of blending Tibetan healing with conventional health practices and integrating Tibetan practices into regional clinic and hospital settings.

Taking questions from the audience, His Holiness touched on matters as diverse as China's tightening control with its intellectuals, the benefits of the Internet and whether the World was getting better or worse. To the latter he replied that he felt the World was getting better based on facts like a growing awareness of the importance of ecology, scientists seriously studying the mind, public calls on ban on nuclear weapons and other indications of a growing awareness. He also recalled his conversation with the late British Queen Mother in 1996 during which he sought her view of the 20th century since she had lived for most of it. The Queen Mother had unhesitatingly responded that the world was getting better because in the beginning of the 20th century there was no concept of human rights and self-determination.

His Holiness' last visit to the area was in 2001, making this the second visit in 10 years. In that decade the Tibetan community of Minnesota, second only to that of the greater New York area, with an estimated 6-7,000 Tibetans, has seen a rise in numbers and an increase in community activities. The latter was reflected in the many side-events planned around His Holiness' visit, including music and dance workshops, a debate on "Impermanence and the Tibetan Community in Exile", cultural performances, documentary screenings and a photo exhibition. According to local newspaper Star Tribune, the first wave of Tibetan refugees coming to the Twin Cities began in 1992 after federal lawmakers passed a resolution authorizing 1,000 immigration visas for Tibetans in India and Nepal to come to the United States in 1990.

During his Minnesota visit, His Holiness also found time to attend a private luncheon with more than a hundred donors and dignitaries as well as meeting with State Governor Mark Dayton who "greeted the Dalai Lama in his capacity as spiritual leader of the Tibet and a major world religious figure" - a standard practice for politicians who meet with His Holiness to avoid any political undertones.

Despite the political sensitivity of receiving the Dalai Lama, however, former President George Bush did bestow him with the nation's highest civilian honour, a Congressional Gold Medal in 2007, while the president was still in office.