Bloomington, Indiana (USA) -- The Tibetan Mongolian Buddhist Cultural Center, located on Snoddy Road on the south side of Bloomington, houses eight monks (some of which are visiting from Mongolia), several workers, shrines and relics, all in the name of promoting a greater understanding of Buddhism and its core message of peace. 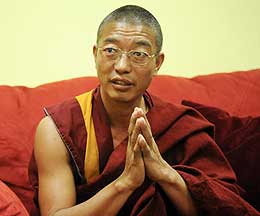 “We sincerely wish to promote a message of peace, compassion and loving-kindness,” Geshe-la said. “We try our best wherever we go on this tour, we try to share this message from a Buddhist tradition,” he said.

In an interview with a visiting monk, the idea that Buddhists do not proselytize was emphasized.

The Tibetan Cultural Center was founded in 1979 by the eldest brother of the Dalai Lama, Thubten Jigme Norbu. Norbu, who was exiled from his native Tibet in the 1950s, served as a professor of Tibetan studies at IU and promoted the cause for Tibetan independence.

In 2007, the Center expanded its mission to include the preservation of Mongolian culture and spirituality and was renamed to reflect this addition.

As a cultural center, it serves not only Buddhists, but hosts many interfaith retreats as well. The cultural building, when originally constructed, was an interfaith construction project.

Muslims, Jews and Christians all provided materials and labor in the construction of the building. This ecumenical spirit remains relevant today, as the center offers programs for people of all faiths.

The center offers opportunities for visitors to come and meditate in its temple area, most recently renovated in 2007 for the Dalai Lama’s fifth visit to the center.

This openness towards other religious traditions stems in part from the teachings of Buddhism and its belief that all people have the opportunity to find enlightenment, no matter what their religious background.

“All of the founders of the world religions have the same idea, same thought, same will. Same will,” Geshe-la said. “All the people of this world have a different mental disposition.

“One of the core beliefs of Buddhism is that there are so many buddhas and bodhisattvas (enlightened beings) and they always take rebirth in different forms that will help the suffering of sentient beings.”

“Buddha said that our mind is clear, naturally. A very luminous and knowing nature. And there are many afflictive emotions, defilements. These all are just residing temporarily inside our mind,” Geshe-la said. “They all are not naturally of the mind. The nature of the mind is really clear.”

Just as the sun, which shines naturally, may be covered by clouds, it is only temporary and the sun’s brightness still remains unchanged, Geshe-la said. “Eventually it is said that all sentient beings, if they practice, if they study, they all have the same potential to enter a state of perfection.”

Geshe-la said the teachings of Buddha cannot be forced upon a person, but instead must be embraced freely by the individual.

“The Buddha said that ‘I cannot pick you up from the suffering world. I cannot give my wisdom or my compassion to you. But I can show you the path toward enlightenment,’” Geshe-la said.