Bloomington, IND (USA) -- Khensur Lobsang Tenpa, who is referred to as Drepung Tripa, has had a history of suffering since he began his life as a Buddhist monk at the age of 11. 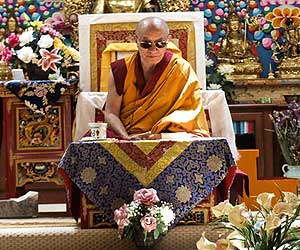 On Sunday, Drepung Tripa sat on a throne in Bloomington’s Tibetan Mongolian Buddhist Cultural Center to give a lesson on that same topic to nearly 100 residents and visitors.

“The truth of the origin of suffering must be destroyed if we are to have peace,” Drepung Tripa said. “The root cause of suffering is ignorance, ignorance of the mind.

“Once you realize you can have selflessness, you can detach yourself from the suffering you face.”

In 1959, at the age of 20, he fled his native country Tibet to escape Chinese persecution along with the Dalai Lama.

After his exile from Tibet, Drepung Tripa was hand-picked by the Dalai Lama himself to be the Head Abbot of two Drepung monasteries in India in 1989.

In 2005, he was named chancellor of Drepung Gomang monastery where he currently studies, teaches and practices his faith.

During his first trip to the United States, Drepung Tripa spoke to the crowd Sunday about how one can find peace in life and how to avoid suffering.

“We should find what form of suffering, what illness we have,” Drepung Tripa said.
And like a doctor who helps to cure a patient’s illness, “a teacher can provide an individual with the means to address the suffering in a person’s life and end the cycle of rebirth,” he said.

Many sat with their eyes closed, as if in a deep meditative state. Drepung Tripa spoke in his native Tibetan language while waiting for his translator to address
the crowd.

Drepung Tripa’s lesson also addressed those who may be new to Buddhist teachings and beliefs. Those who have the desire to find enlightenment, he said, will find it after patience and perseverance.

“One must follow a gradual process, step-by-step,” Drepung Tripa said. “Even beginners can escape suffering if they avoid negative activities from the beginning.

“We should find what illness we have,” he said, referring to suffering, “and after we realize it, we should ask how we can get rid of it. We all don’t want suffering. We all want happiness.”