Chicago, MA (USA) -- Visiting monks from the Dreprung Gomang worked on and dismantled a sand mandala Oct. 3-7, which is a traditional Buddhist ritual. 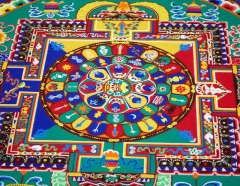 Monks of the Dreprung Gomang Monastery in India visited DePaul last week as part of a tour to spread the message of Buddhism to people of the world.

The monks stayed at DePaul from Oct. 3-Oct. 7. During their visit, they primarily worked on and dismantled a sand mandala, which is a traditional Buddhist ritual.

They also performed a puja on Oct. 6. The puja is an offering ritual that involves chanting prayers and playing instruments. The ritual's goal is to promote healing and good well-being.

According to Dr. David Wellman, a professor of religious studies and coordinator for the monks' visit, this group will travel for one year before returning to the monastery. After they return, they don't do any more travelling and another group replaces them.

He believes their visit allowed students to "encounter a tradition they haven't had any opportunity to encounter" and "see people who have a contemplative practice."

"We live in a culture that doesn't really encourage us to meditate," he added. "We're so distracted."

Wellman also believes the monks share a commonality with the DePaul community.

"Their view of their work is very complementary to the ideas of Vincentism," he claimed.

The Drepung Monastery has a rocky history. The Chinese frequently attacked them in the mid-1900s, and only 100 monks made it out of Tibet when the Dalai Llama fled in 1959, said Drepung's website.

However, their situation has improved since then. According to the website, there are about 2000 monks living at the monastery. Individual colleges within Dreprung have their own specialty, but Gomang focuses heavily on debate and logic.

According to Lobsang Dhondub, a member of the monastery, compassion and karma are among the core beliefs of Buddhism.

"All religions have the same message—the message of compassion and love and kindness," he said.

"All sentient beings have the Buddha nature," he added.

"Debate is a form of analytical meditation," he said.

He also added that some of the elder monks wake up as early as three in the morning to begin meditation practices. The morning is also the best time to practice stabilizing meditation.

Dhondub believes their tour will help show people how Buddha's practices can help them.

"One of the goals for our tour is to share the message of compassion," he claimed.

Senior psychology major Mayra Mayorga supported the monks' presence at DePaul and believes it helped open students up to other cultures.

She is also fond of what Buddhism stands for.

"They encourage peace in general," she claimed.

For DePaul students and faculty, seeing the monks of the Gomang monastery was educational. Wellman believes there was disconnect between students' impressions of monastic people and the reality of who they are.

"They're not necessarily what we expect," he said.

However, he believes what they do is truly incredible.

"I think there's something to be said for breathing and sitting and being present in the moment."