Buddhist monks' visit to include construction of brilliant symbol

Evansville, IN (USA) -- Buddhism is less a religion than it is a discipline, a practice that puts one on a path toward successful - moral, peaceful, happy - living, said Evansville attorney, Jay Ziemer, a practitioner. 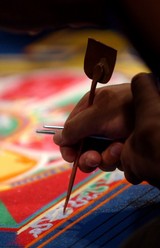 And it is not at odds with the tenets of Christianity, he said, adding that he knows several people in the Tri-State who belong to churches and also Buddhist study groups called "sanghas."

"Buddhism doesn't recognize a deity, but after that the essence of both Buddhism and Christianity is love and compassion," he said, adding, "We are all looking for something, a better way of life, happiness Christians, Buddhists, even Muslims; we just have different ways of getting there."

Study and meditation are hallmarks of the practice of Buddhism, Ziemer said.

Although its roots are in India, dating back about 2,500 years to the life of Siddhartha Gautama, Buddhism has spread throughout Asia and to the United States and Europe through immigrations and westerners who visit the East and bring home the practice themselves.

It is estimated there are more than 300 million Buddhists world wide "although in the U.S. they account for no more than 4 to 5 percent of the population," Ziemer said.

There are as many variations in Buddhism as there are countries and cultures where it is practiced, Ziemer said, likening the distinctions to those within Christianity's numerous denominations.

But the central tenets are the same.

Buddhism is alive and well in the Tri-State, Ziemer said, explaining there currently are four sanghas meeting here regularly.

The oldest, the Mindful Heart Sangha, dates back more than 15 years and practices the oldest form of Buddhism, "Thera Vada," which is based on the oldest Buddhist texts in existence.

The newest, organized earlier this year, is the Bodhi Tree Sangha that affiliates itself with the Tibetan Mongolian Buddhist Cultural Center in Bloomington and its director, Arjia Rinpoche, Ziemer said.

Bodhi Tree members, in collaboration with Cecile Martin, owner of Bodyworks Massage Institute in Evansville, have arranged for a group of six monks from the Tashi Kyil Monastery in Tibet to visit Evansville Nov. 12-16.

The visit is a fundraising project for the monastery and there will be several public programs offered during their four-day stay, Ziemer said.

The programs are free, but donations will be accepted.

The monks' visit has been made possible by the Bodhi Tree sangha's close relationship with Arjia Rinpoche, director of the TMBCC, the sponsoring organization for the monks' 15-city, 2011 American tour; Rinpoche will be with the monks during their Evansville visit.

Rinpoche is a Tibetan Lama and former abbot of the Kumbum Monastery in Tibet; He was a young child when China invaded Tibet in 1950 and spent 40 years living under their rule. He finally fled Tibet in 1998.

His book, an autobiographical account of those 40 years "Surviving the Dragon" will be available during his visit here and time will be set aside for him meet locals and to autograph copies of it book.

Rinpoche assumed the leadership role at TMBCC in 2006, replacing the founder, Thubten Jigme Norbu, brother of the Dalai Lama, who appointed him as successor to that position after Norbu became ill. Norbu later died in 2008.

Among the highlights of the monks' visit will be the construction of a sand mandala at Bodyworks Massage Institute, said Martin, adding that the facility will be open during that period for anyone who wants to come in and watch the detailed and lengthy process.

The construction will begin at 6 p.m. Saturday, and will continue through Wednesday she said, adding that, at the end of their visit the monks will destroy the mandala and, in a prayerful ceremony, dispose of the sand in the Ohio River on the Evansville riverfront. The process calls to light the impermanence of everything in this life, Martin explained.