Toledo, Ohio (USA) -- The Toledo Zen Center, a popular spot for local Buddhist events and services, is to be renamed the Buddhist Temple of Toledo in a dedication ceremony Sunday. 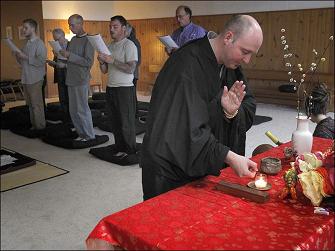 << Jay 'Rinsen' Weik leads a service at the Toledo Zen Center in Holland. The center is changing its name to better reflect its growth as a spiritual home for Buddhism as well as to address confusion about what Zen is. THE BLADE/LORI KING

The reason for the name change is to better reflect the center's growth as a spiritual home for Buddhism as well as to clarify its purpose, according to Jay "Rinsen" Weik. who said, "There's a lot of confusion in the culture about what Zen is."

Edward Espe Brown, a well-known Soto Zen priest and gourmet cook from California, will preside at the ceremony to be held at 10:30 a.m. at the center/temple, 6537 Angola Rd., Holland.

"One of the things that really motivated [the renaming] was that people were seeing the word 'Zen' used to sell digital devices," Mr. Weik said in an interview at the spacious facility this week.

"They see it used to sell shampoo, to sell furniture. … It's really confusing in the culture. The word has almost no usable meaning. It's come to mean a relaxed, slightly Asian-esque lifestyle.

Mr. and Mrs. Weik have been studying Buddhism for more than two decades, having met when Mr. Weik, a Toledo native, was a student at the Berklee College of Music in Boston.

The couple moved to Toledo in 2001 to be closer to Mr. Weik's family, and shortly afterward opened the Zen Center and the Shobu Aikido of Ohio in a business mall in Holland. (Aikido, a martial art, means "the way of harmony.")

The Zen Center attracts different "concentric circles" of participation, Mr. Weik said, from college students who visit one or two times for class credit in world religions, to devotees who become part of the close-knit Buddhist community.

This year, 16 members of the Zen Center/Buddhist Temple will formally be initiated into Buddhism.

"We have everything from 19-year-old undergrads to people in their mid-70s, and pretty equal gender distribution," Mr. Weik said.

One of the distinctions of the Buddhist Temple of Toledo is that it is thoroughly American, even Midwestern, in its culture.

People who visit Buddhist centers often expect to see a Zen master with a strong Asian accent teaching or leading the services and are surprised that a new generation of Buddhist sensei, or teachers, are as American as the Protestant clergy person next door, Mr. Weik said.

He credits the Americanized form of Buddhism available today to the labors of his predecessors, who sifted the Asian cultural influences from the essence of the religion.

Buddhism, which has 350 million adherents worldwide, was founded by a young prince born more than 2,600 years ago in the India-Nepal border region.

The prince attained enlightenment, becoming the Buddha, whose teachings flourished in China, Korea, and Japan before arriving in the United States.

"Among my 'Gen X' generation of Buddhist teachers, there's a great thankfulness that the generations that preceded us did the work translating things," Mr. Weik said.

"Their teachers were all hard-pressed to speak English coherently, and so there's been this struggle -- actually it's been the work of their lives -- to translate this into discerning what is actually the teachings of wisdom and compassion and what is of Japanese culture."

The new crop of Zen teachers don't need to sift the culture from the precepts because that task has already been done, he said. "Our work is actually taking the real heart of wisdom and the heart of compassion and finding a way to make that accessible to middle America," Mr. Weik said.

The Zen Center, which started with just a handful of people 11 years ago, now draws about 30 on a typical Sunday morning.

Services include a time of meditation and a Dharma talk by Mr. Weik (the talks are available online at thedrinkinggourd.org).

The center offers a Dharma school for children during the 10:30 a.m. Sunday services and a prayer service every Wednesday at 7:15 p.m.

Practitioners come from a variety of spiritual backgrounds, Mr. Weik said, and because Buddhism has no religious tenets, some Zen Center members remain active in Christian churches, Jewish synagogues, and Islamic mosques.

Buddhists consider their founder to be "a guy, a teacher," Mr. Weik said. "So it's not like he's a deity figure. We honor him as the original teacher. … Buddhism is nontheistic. It's not atheistic at all, but it's not theistically oriented, either.

"It basically says the development of wisdom and compassion and the ease of suffering in life is not tethered to a particular belief system in some essentially unknowable thing," he said.