St Paul, MN (USA) -- From the outside, nothing distinguishes Watmongkhool-Khunaram from the family residences on the block. 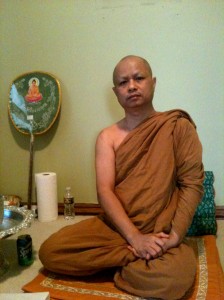 The temple operates out of a two story grey house surrounded by a grey cyclone fence. But when you leave your shoes at the door, step inside and you find a small prayer hall with statues and pictures of Buddha on the wall and a low dais where Ajan Phra Khrupras- itthamrha Kosam, the resident Thai Buddhist monk sits during services. The lay people coming there are not Lao or Thai. They are Hmong.

Traditionally the Hmong in Laos and Thailand believe in shamans or have been converted to Christianity. I had not heard of Hmong practicing Buddhism. It was therefore a surprise when I learned that a group of Hmong had provided the finances to start a Buddhist temple in St. Paul.

My first thought was that they might be Hmong from the last wave of Hmong refugees who had lived in Wat Tham Krabot under the protection of Thai Buddhist monks until the closing of that last unofficial refugee camp. But Chung Yang, a key founder member, has been here in Minnesota since 1991, He had not learned much about Buddhism in Southeast Asia, but his interest was piqued when his brother was healed by a Thai monk who came to his home.

The monk was then living at a Lao Buddhist temple in Anoka. This led to Chung and a few others inviting the monk to form a temple closer to the Hmong in St Paul.

Ajan Kosam, the resident monk, is quiet, reflective and thoughtful in all his answers to our questions. He has an air of natural calmness around him. He was born in Thailand December 6, 1968.

Like many Thai boys he became a novice while still a young boy. He served four years. Later at the age of 22 he became a monk. His teacher came to America and then invited Ajan He first lived in Anchorage Alaska, but has also lived in Milwaukee and Madison, Wisconsin before coming to Minnesota. He was first contacted by the Hmong when he was at a temple in Anoka County.

I asked Ajan Kosam what he would like to say to readers. He said his mission is to serve the community and help keep them strong in Buddhist principles. He explained some of the core principles of Buddhism – don’t kill, even animals: don’t say bad things, don’t speak badly of other people. It is his mission to try to help people maintain a Buddhist mind awareness, to maintain Buddhism here in the west.

The Wat opened in October of 2012 and is now serving about fifteen Hmong families who have been drawn to Buddhism. The house is leased by a Hmong benefactor with substantial financial help from four other Hmong and donations and community support. The members are currently in the process of obtaining a tax free status. The Wat is located at 697 St Anthony Avenue, St Paul, MN 55104, just west of Dale. Visitors are welcome and visits can be arranged by calling Mr. Yang at 952-594-9582.