Battle Creek, Michigan (USA) -- Every Sunday morning, tucked in the basement of an insurance company building and located in the Holistic Health Center, a group of people search for something few ever find — peace and contentment. 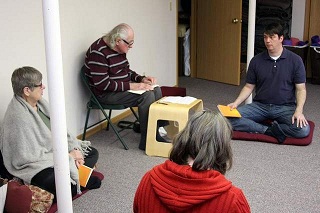 << A Buddhist study group discusses various practices during its weekly gathering at the Holistic Heath Center on Sunday.

Through the act of meditation, a group of 12 to 15 people, some who have studied Buddhism for years and others who are new to it, learn how to meditate and leave the world’s troubles behind and, in turn, face that world with a renewed energy and optimism.

“People are becoming aware of the benefits of meditation,” said Matt Willis, who runs a Tibetan Buddhist study group every week in which the study of meditation is paramount. “People are happier, they have more empathy, their stress is a little less. The more you put in, the more you get out of it.”

"The practice of meditation, Willis said, is resting the mind in the moment.

“It’s calming the mind down,” he said. “You control your breathing. It’s going to lead to a calmer life. It’s a practice; you have to build slowly.”

And in today’s decidedly frantic world, living a calmer life is what everyone seeks, he said.

“People are looking for some kind of inner peace,” said Willis, who formed the Palchen Study Group in his living room in 2009 and then expanded it to the Holistic Health Center at 181 North Ave. in 2012.

The group meets every Sunday from 9 a.m. to noon and the sessions are broken into three one-hour parts — meditation, book study and Buddhist meditation for beginners. It’s free and open to everyone.

“I probably get one call a week from someone interested in learning about it,” said Willis, who works at Willard Library during the week.

For Willis, the study of Buddhism has been the answer to many of the questions he’s had for years.

A native of Garden City, a Detroit suburb, Willis admits as a teenager he didn’t know what he wanted and, worse, he had no idea how to find it.

Then, at age 19, he was introduced to Buddhism.

In 1990, he “took refuge,” the first step in Buddhism, and since has immersed himself in its study. He traveled to India three times and lived at a Buddhist monastery in Woodstock, N.Y., for two summers.

“I’ve always been very enthusiastic about Buddhism but it’s been within the last 10 years I’ve been able to be more disciplined,” he said.

He moved to Battle Creek in 2002 and brought his interest in Buddhism with him.

After forming his study group, he has also brought Tibetan Buddhist teachers to town to speak and spread the word.

In 2012, Bardor Rinpoche visited Battle Creek and Willis said more than 130 people came to listen. A similar result was seen in November when Lama Tashi Topgyal came to talk.

“People came from Chicago, Evansville, Toronto, Ann Arbor and Columbus,” he said. “We even had someone come from Seattle. I think it’s neat for this area.”

Willis makes it clear he is not a Buddhist teacher. There is only one of those in Battle Creek, Sokuzan Bob Brown, who is the spiritual head of SokukoJi Buddhist Temple.

But the two groups, while separate, have a good relationship, Willis said, and have the same aims — “letting go of negative thought patterns,” he said.

“If we get angry, think about how much work it takes to stay angry,” he said. “Buddhism isn’t necessarily creating inner peace. It’s already there. You don’t have to create it; you don’t have to make it stronger. It’s always there.”