Springfield, MI (USA) -- It was a unique scene inside the home of a Springfield professor Monday, on a day where many Americans workers were enjoying the Labor Day respite. KSMU’s Bailey Wiles attended a traditional Dana ceremony that honors monks and brings us this report. 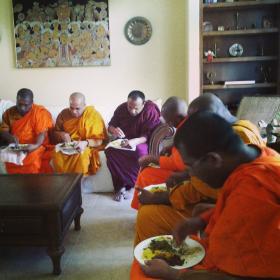 Sitting quietly on the couch, a group of Buddhist Sri Lankan monks wore beautiful flowing robes in bright colors of orange, yellow, and maroon that stood out in contrast to the dark cloudy morning sky. Bald and barefoot, many carried ornate fans to cool themselves from the heat. The smell of wonderfully spicy food wafted in from the kitchen where a Springfield family prepared a meal ahead of the ceremony.

Steve Berkwitz and wife, Imali, host the Dana ceremony every year and they invite 10 or more monks to come to their home and enjoy a meal. The ceremony is meant to honor the monks and to connect lay people with the monastic community. It also shows the family’s generosity and bestows them with good merit for the year to come.

“I recognized a few words here and there of homage to the Buddha, the Dharma, and the Sangha.”

That’s Holly Graves, leader of the Ozarks Dharma Community, recalling the monks’ chanting of several Pali songs with themes from nature to generosity.

After the chanting, a sermon was spoken in Sinhala honoring the Berkwitz family and wishing them good merit and health for the following year. Then most attendants helped serve each monk food, which was eaten with their hands as is done in traditional Sri Lankan culture.

“I was given a plate of food by one of the Sri Lankan woman and I was able to go to each monk and they would make a hand signal if they wanted me to put some on their dish or they would also make a hand signal to say no if they didn’t want any. It was really neat to be able to give to them in that way” said Graves.

Many families in Sri Lanka bring food to monks every week, as Buddhist monks do not pay for or grow their own food. They are fully supported by the community of lay persons around them.

“I really enjoyed being a part of a tradition that goes back 2,500 years of offering food to the monks and being blessed by the monks and I just really found it very meaningful” said Graves.

Many from the Springfield Buddhist community came to this event, as well as students enrolled in Berkwitz’s Buddhism class at Missouri State University. In addition, many Sri Lankan people from around Missouri attended to help the family prepare for the ceremony, and were also honored with good merit.

At one point during the ceremony, a long string was passed around so that everyone was holding a piece between their fingers. The end of the string was tied to a tea pot full of water and was blessed by more chants sung by the monks. Afterward the monks and the Berkwitz family drank the water and tied a piece of the string around their wrists to bless them.

The monks also took time to address the small group in attendance and offer advice, as described by Holly Graves.

“I think he [the monk] really emphasized how happy it makes a person to be generous and he said that we had done a good thing by being generous to the monks. But he also encouraged us to be generous to other people,”  said Graves.

As the monks slowly walked out of the Berkwitz house and back into the van in which they arrived, many lay people stood around the hallway and with hands folded, bowed to the monks out of respect.