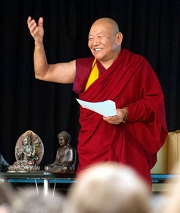 Champa Lhunpo talked about his religion with students from world religion classes at Hickman and Battle high schools.

Thursday afternoon he was slated to speak with members of an Amnesty International student group at Hickman about human rights violations against ethnic Tibetans in China.

Lhunpo escaped Tibet in 1959 after the Chinese takeover, initially settling in Dharamsala, India, home of the Dalai Lama and the Tibetan government in exile. Now in the United States, he teaches Tibetan language courses at the University of Kansas.

Lhunpo said after the talk that the situation in Tibet under Chinese rule is worsening.

“Things are really deteriorating in Tibet,” he said. He said monks are practicing self-immolation to protest Chinese oppression.

Lhunpo lives a comfortable life in the United States now, but he’s in contact with people in Tibet.

“My fellow citizens in Tibet are suffering,” Lhunpo said. “We are kind of their representatives to the rest of the world.”

He said he would encourage students in the Amnesty International group to write letters to U.S. government leaders and to sign petitions to help give Tibetans more freedom.

During his morning presentation, Lhunpo said fully ordained monks like him take 283 vows, are celibate and don’t drink alcohol. He discussed the cycles of samsara, suffering and continued reincarnation. He said at its center are three poisons: ignorance, hatred and greed or desire.

“Once we become free of the three poisons, we break the cycle of reincarnation, and we become a Buddha,” he said. “We are enlightened.”

He discussed the upper realms of existence, which comprise gods, demigods and humans; and the lower realms: animals, hungry ghosts and hell.

“The human realm is great” because it offers the best chance of enlightenment, though humans suffer and die.

“Human life, we say, is precious because it’s hard to achieve,” Lhunpo said.

He said Buddhists don’t believe in converting others to their religion.

“We believe all religions have the same value,” Lhunpo said. “Dalai Lama always says keep your own religion but take the good things from other religions.”

A student asked what it’s like to meditate. “I think just a little bit calmer, that’s for sure,” Lhunpo said.

He said studies of the brains of meditating monks show positive changes in their brains.

“I think meditation helps,” he said. “It’s really kind of preparation for other things.”

“I know about a lot of religions but not about Buddhism,” said Hickman sophomore Antonio Tornez.