Weik Sensei installed as abbot of Buddhist Temple of Toledo

Toledo, Ohio (USA) -- The Rev. Jay Rinsen Weik laughed off some solemnity in the midst of a rare and momentous religious observance by saying, “I’m really glad I didn’t fall. That’s the part I was nervous about.” 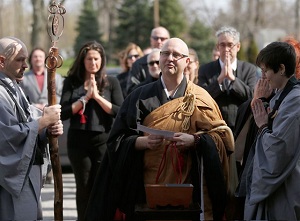 Rinsen Sensei was stepping up on a platform Sunday in front of about 100 people to sit in the high seat for the first time as the founding abbot of the Great Heartland Buddhist Temple of Toledo and Sangha.

Rinsen is Mr. Weik’s dharma name and sensei, meaning teacher, is his formal title. The term sangha identifies a community of people who practice the teachings of the Buddha.

Rinsen Sensei’s installation in that chair, the “mountain seat,” signified a major change for the community that he and his wife, the Rev. Karen Do’on Weik, began in 2001 as the Toledo Zen Meditation Group.

Great Heartland was once formally linked to other Zen centers, but this service marked independence, making it a stand-alone institution for the dharma, or the teaching and way of the Buddha.

“It’s amazing to see all this come together after all these years. The dharma is taking root here in the heartland in a fresh and new way that we are all a part of.” Rev. Do’on said after the ceremony.

Speaking from his new seat during the service, Rinsen Sensei gave his “fundamental backbone statement” after joking, “My back hurts.”

“The great way is about awakening, about real awakening, about healing the heart and realizing the boundless — for ourselves, for each other, and for all beings. This is my backbone statement.”

Rinsen Sensei gave a dharma talk, or sermon, based on a Zen koan that included the sentence, “The words of the Buddha ancestors are like ordinary rice and tea.”

He followed that talk with public “dharma combat” with a line of questioners, encounters that were lighthearted at times, demonstrating the usually private method of teacher-student instruction.

Rinsen Sensei could not sit in the mountain seat until he received final authorization as an independent Zen teacher by his teacher, James Myo’un Ford, Roshi, in a private ceremony in March.

“The way the story is told is that this has passed down through all these different generations, and it's gone from India up to China through into Japan and now, finally, arrived at its ultimate point of Toledo,” he said in the ceremony, laughing.

“So in that line I’m actually the 87th generation, which is kind of mind-blowing.”

“In Japan, there’s a lot of family temples, and we’re kind of like that,” Rinsen Sensei told The Blade earlier. “She and I discuss everything together; we think about it way too much. … This is where we really meet, is in the dharma and in the practice, and she brings a lot of qualities that I lack.”

Great Heartland is “very family oriented,” Rinsen Sensei said. Besides offering traditional ways of Zen practice, such as meditation and intensive religious retreats, “we also have a Sunday community and a growing life that way.”

“As far as having the families here and the children, it's really great that we have that,” Rev. Do’on said. “But at the same time, if someone wants to come here and they want to go deep into the pool ... they can totally do that because we have trained in that way. What we’re trying to do is be really a wide-open gate, and everybody’s welcome.”

The core of Great Heartland’s way is “awakening,” Rinsen Sensei said, “full and complete awakening. That’s not a myth or a joke. Enlightenment is not a metaphor or a fable. It’s an actual shift in perceptual consciousness that is verifiable, factual, no big deal, and real.

“And it’s a very human thing, but what we do is we really help people to notice it, to honor it, to train it, to acknowledge it, and to live from it.”

Having the responsibility to lead northwest Ohio’s Zen community might be more nerve-inducing for others, but the abbot is comfortable in front.

He is also the sensei or teacher at Shobu Aikido of Toledo, a martial-arts school in the same building as the temple, at 6537 Angola Rd., Holland, and he holds a fifth-degree black belt.

He is a lecturer in jazz guitar at the University of Toledo and regularly performs; he is helping to form an academic minor in mindfulness and creativity at the university, and he is faculty director of a Zen fellowship for students.

And he is head of the musical group Zen Arts Ensemble, which will have a CD released nationally by Summit Records.

Rinsen Sensei said, laughing, “I’m busy, but I’m busy with things that I chose, that I like, so I’m not complaining.”

Add to that, “I’m just ridiculously in love with my wife, and my daughter is a teenager and we have a great relationship. [Isabella Ryuka Weik, also a practicing Buddhist, is a student at Toledo School for the Arts].  That’s even more impressive to pull off, I think.”

“I taught him everything he knows,” Rinsen’s father, Otto Weik, said before the service. “I’m proud of him; it’s wonderful. He helps a lot of people, and I don’t know how he does [all] he does.”

Rinsen Sensei was raised Catholic. “Somewhere along the line he ran into this, and that’s fine,” his father said.

“Our real passion, our heart, was really with the dharma,” Rev. Do’on said, “and we’re just so grateful to be able to bring the dharma.”