Buddhist groups around Chicago offer another path to sobriety

Chicago, MI (USA) -- At first glance, the basement gathering in downtown Woodstock seemed just like one of the 12-step meetings that take place thousands of times a day across America. Ten people dealing with alcoholism, drug addiction and other issues sat on stackable chairs and talked about how they were trying to keep their lives together. 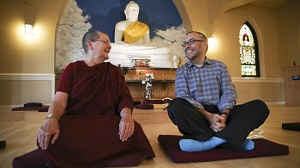 But when the participants closed their eyes to meditate, it was clear that this was something different.

"Imagine covering the world with … positive thoughts," said Bhikkhuni Vimala, a Buddhist nun wrapped in the maroon robe of Woodstock's Blue Lotus Temple. "Send compassion to north and south, east and west. Radiate an open heart and fearless mind to all beings in existence — those above and below, the seen and the unseen, those being born and those dying."

Such astral contemplations are the hallmark of Refuge Recovery, a self-help program that uses Buddhist teachings to guide adherents toward sobriety. It's one of several recovery movements undergirded by the philosophy, and some who have tried it say it has helped in ways traditional programs have not.

"I had worked all the 12 steps and felt like I had all these pieces to the puzzle, but some pieces were missing and I didn't know where they were," said a 31-year-old attendee named Matt, who has struggled with heroin and other addictions. "For me, meditation and being able to learn about other religions has brought me to a greater understanding of spirituality and made me a better person."

The classic 12-step model of sobriety, in which addiction is banished by a spiritual awakening, was introduced in the 1930s, but in recent years it has been subjected to steady criticism. A psychiatrist concluded that no more than 8 percent of people who try the program maintain their sobriety for longer than one year, while a comparative analysis of treatment programs found that Alcoholics Anonymous was only the 38th most effective method for people with drinking problems.

A hunger for alternatives has led to new approaches such as SMART Recovery, which aims to use rational thinking instead of a higher power to conquer substance abuse. Buddhist philosophy keeps the spirituality but takes it in a different direction.

"Feeding an addiction is like scratching an itch," said Peter McLaughlin, who for several years has led a group called Heart of Recovery at Chicago's Shambhala Meditation Center. "The practice of meditation might slow us down enough that we actually don't need to do that. We see it, we experience it, we feel the pain of the wound, but we don't immediately start scratching away at it."

Stephen Asma, a philosophy professor at Columbia College and the author of "Buddha for Beginners," said addiction treatment is a natural extension of Buddhism.

"Other religions and philosophies are worried about how the universe began, and whether we have an immortal soul, but Buddha said we should forget about that stuff and learn to control our desires through meditation," he said. "The use of Buddhism to treat addiction is an old tradition in the sense that everyone is a potential addict according to Buddha — because craving is the natural human default psychology."

Meditation techniques separated from the context of Buddhism are catching on, too. Researchers have looked at a practice called "mindfulness meditation" — in which people focus without judgment on their thoughts and emotions — and concluded that it can be an effective way to prevent relapse.

"It's awareness and also building our tolerance for things that are uncomfortable," said Neha Chawla, a psychologist who founded the Seattle Mindfulness Center. "That gets to the heart of it, especially the self-medication part. You learn to recognize when there is discomfort so you're not jumping to fix it or reacting automatically."

Refuge Recovery is a relatively new program, created seven years ago by Noah Levine, a Buddhist teacher and author from California who was unfulfilled by what he regarded as the 12 steps' Judeo-Christian slant. Levine said he does not see Refuge Recovery as a challenger to 12-step meetings — many participate in both programs — but rather an approach for people looking for another path.

"The Buddha himself was almost like a psychologist," Levine said. "His own understanding was that suffering is the repetitive craving for pleasure, and that is the cause of all human unhappiness. This craving is what people who are addicted experience in a very heightened way. The challenge is to figure out a way to relate to pleasure with a nonattached attitude."

His program aims to cultivate that attitude through meditation, which takes up a portion of each Refuge Recovery meeting. At the recent Woodstock meeting, Bhikkhuni Vimala read one dealing with compassion, directing the participants to close their eyes, relax, focus on their breathing and ponder three phrases:

May I learn to care about suffering and confusion.

May I respond with mercy and empathy to pain.

May I be filled with compassion.

That led to a discussion about building compassion for oneself as well as for others, and about how people can practice that in their own lives. Bhikkhuni, a Texas native known as Judy Franklin until she was ordained as a Buddhist nun in 2007, said such insights are what make Buddhism a natural fit with recovery programs.

"Addiction is a suffering; it's something we create ourselves because our desire for something is stronger than our ability to relinquish it," said Bhikkhuni, who has used Refuge Recovery to help with her own issues of overeating. "Letting go of those attachments that become suffering — that's what we're always working with."

Though Woodstock appears to have Illinois' only Refuge Recovery meeting, two regulars hope to start another soon in Des Plaines. Meanwhile, some say its techniques are starting to bleed over into more traditional programs.

"I'm very active in the 12-step world, and I hear very regularly about meditation," said Tyler Lewke, who co-founded the Woodstock program. "I did not hear that 10 years ago. Back then, hard-core prayer was part of the package. ... I'm overwhelmed by how much I'm hearing now about mindfulness and meditation as part of people's program of recovery."