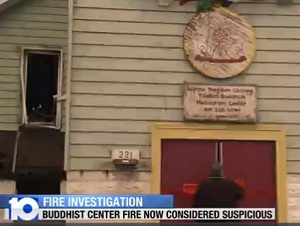 “So much is gone. There were texts, religious items and important relics inside,” said KTC Buddhist Center’s Meditation Director Eric Weinberg. “"But the most important things are the teachings that we've practiced, that are now in our hearts and our  minds.”

Members arrived for 7 a.m. and 9 a.m. prayer services and meditation Sunday only to watch the fire burn.

"We're not sure what to do yet,” said KTC Board Director Michael Brennan. “We have to check with our insurance, our membership, our lineage holders in New York and see how to proceed. We know that we will continue on."

Columbus Firefighters received multiple calls from those near Rich and Grubb Streets reporting the fire around 4:30 a.m. Investigators are working to figure out how the blaze sparked. Early indications signal the fire began near an external staircase on the south side of the building. Damage extends from the basement to the roof. The fire was so involved when crews first arrived that firefighters had to fight flames from the exterior only.

A mother and her daughter whom live next door had to leave their home because firefighters were concerned about burning debris falling onto the house. They were not hurt.

Members of the Buddhist Center took some piece of relief in seeing their signature Dream Flag continuing to blow in the wind above the building throughout the fire and extinguishing efforts.

Weinberg explained the Dream Flag represents compassion and wisdom holding victory over ignorance. He said the Dream Flag is often flown above Buddhist Centers. Firefighters were able to take the flagpole down and give the flag to members.

“It is a shame. It is devastating, but we'll rebuild from this,” said Brennan.

Firefighters tell 10TV they received multiple reports of trash can or dumpster fires through parts of west Columbus. It was unclear if they were connected.