A Minnesota boy believed by many to be a reincarnated lama takes a key step along his predestined path. 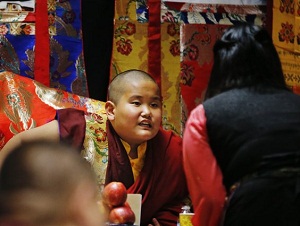 << Jalue Dorjee,9, presided over a religious ceremony at the Tibetan American Foundation in St. Paul where he was the guest of honor.

All week, the 9-year-old monk — believed by many Tibetan Buddhists to be a reincarnated guru — had been preparing to deliver his first public speech. Finally, on a rainy night in St. Paul, Jalue Dorjee faced a slew of cameras and hundreds of hopeful faces.

He sat alone on a decorated stage at the local Tibetan community center, a large portrait of the Dalai Lama smiling down on him. He drew in a deep breath and looked out at the hushed crowd.

In a clear voice, he began reading aloud: “I am very honored by your presence here today and for your support for the Tibetan community and dharma in Minnesota. … ”

To the faithful, he’s more than just a boy — he’s an enlightened being. He’s also a pioneer. Buddhist scholars say he is the first lama born in Minnesota and among a scant few ever discovered in the West.

So far, Jalue appears unfazed by the pressure to fulfill the hope that he will one day become a great lama.

Lamas typically are discovered in the Tibetan Buddhist tradition through a process known as divination. Dreams also play a key role in identifying reincarnated lamas. In this case, while Jalue’s mother was pregnant, a highly respected lama from India who was visiting the Twin Cities had a dream about her child. He conducted a divination that convinced him that the child was the reincarnation of a Buddhist spiritual master.

After Jalue was born, several prominent lamas in India weighed in on the question of who he is. The seventh incarnation of a high lama had died in Switzerland a few years before Jalue was born, and Tibetan Buddhist leaders were searching the world for his reappearance. Although it was highly unusual for a lama to be discovered in the West, the little boy from Minnesota was a prime candidate.

On a cold January day in 2009, a letter arrived at Jalue’s home. It bore the seal of the greatest spiritual leader of the Tibetan diaspora – the Dalai Lama.

So began Jalue and his family’s spiritual odyssey.

The first decision they faced was whether to leave Minnesota for India, where there are many lamas and teachers to help properly train Jalue. Again, the Dalai Lama weighed in, advising Jalue’s parents to stay in Minnesota until he is 10 so that he can master English and receive a good education. Then, they should send him to a monastery in India to live with the other monks and further his religious training.

He turns 10 in December, and he has been accepted to a prestigious monastery in India. But his parents have been discussing whether it’s too soon to send him abroad. Perhaps they will wait a little longer, they say.

His mother, Dechen Wangmo, said she is gradually becoming more comfortable with the idea that he will go to the monastery — someday.

“As a mother, definitely when your son goes away, I have some feelings,” she said, speaking through a translator. “But since he’s growing up, he can take care of himself. And India is not so far away.”

For now, his religious education takes place in Minnesota.

He wakes just before 6 a.m. and heads to the family prayer room. There, he sits with his father and reads aloud from Buddhist scriptures. Boxes of the sacred texts line the walls in the room, and Jalue has learned many of them by heart.

His father, Dorje Tsegyal, listens as he reads, gently correcting him as needed. The two have a deal: For every book the young lama memorizes, he receives one Pokemon card. He’s up to 258 cards.

When he finishes his daily readings and prayers, he heads to school. A third-grader at Highland Elementary, a public school in Columbia Heights, Jalue blends in with the other kids. During an all-school assembly, he sat with his classmates on the floor, a stark contrast to Tibetan gatherings outside of school, where he sits apart from the other children— often with other, older monks.

Were he growing up in India, he would wear his maroon and gold monk robes all the time. But in the West, wearing the robes is not practical, his mother said. So he sticks to wearing the colors — mostly maroon and gold University of Minnesota T-shirts and sweatpants.

Jalue seems to understand who and what he is. He doesn’t hesitate when his classmates ask him questions.

He does his best to explain, and they seem to understand, he said. But for the most part, his friends see him as just Jalue. “They treat me like I’m just a normal kid,” he said. “It’s fun.”

The young lama’s life is far from normal, however. In addition to his morning scripture study, he receives tutoring on the Tibetan language. On the weekends, he is learning Chinese — one of the four languages he’s studying.

“It’s a little bit hard for him compared to other kids,” Dechen Wangmo said, adding that her son is obedient and does not tire easily. “He never says no.”

Seed for the next generation

His schedule is full because expectations are high, his parents explained. He is in a race against time, following Tibetan Buddhist beliefs that as a reincarnated lama, he must continue where his predecessor — the seventh incarnation — left off.

“He’s still young, and it’s very hard to do many things by himself,” said Thinly Woser, former president of the Tibetan American Foundation of Minnesota and one of Jalue’s teachers. “But he is progressing really well with the rituals and readings. But with deep meditation, it still has yet to come.”

Still, as a lama growing up in the West, it will be a challenge, said Thupten Dadak, one of the earliest Tibetans to make Minnesota home. (Dadak is largely responsible for helping to resettle thousands of Tibetans in Minnesota. Today, Minnesota is home to the nation’s second-largest Tibetan community.)

“A young monk — it has never happened in Minneapolis,” he said. “He’s an example of how the young generation should follow. This is our seed for the next generation.”

Saturday mornings are spent in a swimming pool at a nearby Life Time Fitness, where he joins other children learning to swim. The gravity of his role doesn’t weigh him down at all as he joyfully splashes around the pool and demonstrates how long he can hold his breath underwater while doing the “dead man float.”

On the night of the ceremony, Jalue was decked out in his monk robes and a pair of red Nike sneakers.

As the guests arrived, he sat with his friends, other Tibetan-American children, and fiddled with a Rubik’s cube, cracked jokes and showed off his beatbox skills.

“Here comes the paparazzi,” he joked, referring to the many photographers who were there to take his picture.

People had come to celebrate the opening of the new Buddhist education center in the Twin Cities, which was designed, in part, to help train Jalue. The plan is that he will one day teach at the center, which bears his name.

The list of guests was long and included a world-famous Tibetan musician and various elected officials, including Sen. Amy Klobuchar, D-Minn. But all eyes were on the young lama as he read his speech.

“I am very happy to spend this day with you,” he said. “I am also looking forward in the future to be able to teach the dharma here in Minnesota. I would like to teach everyone about compassion. … Teaching about compassion and kindness is the heart of the Buddha’s teachings, and that is my main goal for this education center.”

He finished by thanking everyone for attending, then he let out an audible sigh of relief and flashed a wide smile. The audience clapped.

His first speech over, Jalue settled back in his chair. As the night wore on, he politely clapped at the right times. And only occasionally did he peek at the Pokemon cards stashed under his monk robes.