A Thai Buddhist center is moving into an old church in St. Louis Park.

St. Louis, MN (USA) -- The monks, draped in orange robes, sat side-by-side in the gathering hall of the Thai Buddhist Center of Minnesota, an arrangement of flowers displayed in front of each one. 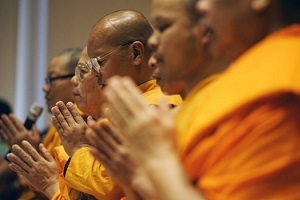 Visitors, each holding a bowl of water, slowly moved toward the monks. They poured water on their palms, and it dribbled onto the flowers below.

For the Thai, the water ceremony is a symbolic acceptance of the monks’ blessings. It was one of many traditions celebrated Sunday at the center’s Thai New Year festival, the first event held in the community’s new temple, a former Lutheran church in the Birchwood neighborhood of St. Louis Park.

The temple is a major upgrade for the Thai Buddhist Center - also known as Wat Thai of Minnesota - which until last year operated out of a rambler in the Elk River woods. Its members hope the building becomes a home not just for Buddhist meditation, but for Thai culture in the Twin Cities.

“We want to use this [as a] place ... where people can come learn Thai,” said Yin Srichoochat, program manager for the center. “Thai food, Thai dancing, Thai language, Thai instruments. Because they don’t have any location to dedicate to this.”

It’s not the only religious institution in the area: Just across Hwy. 100 are Beth El, a synagogue, and Benilde-St. Margaret’s, a Catholic prep school. The chance to build interfaith relations is not lost on them.

“I think we could set up a really good example for people if the leadership between all these different churches and faiths showed acceptance, warmth and interest in each other,” said Tracy Schultz, Wat Thai’s program coordinator.

Wat Thai of Minnesota was founded in 2003, the first of three Thai Buddhist sects in and around the metro area, co-founder Sutape Ple-Plakon said. Its first temple was a house in Becker; the congregation moved to Elk River in 2006. It has 20 to 30 primary members, although hundreds more attend its cultural offerings, many from the metro area’s Hmong population.

The Elk River center had a secluded setting for the monks to chant and meditate. But it was at least 45 minutes from Minneapolis, too far for many to drive, and not nearly big enough for the events leaders wished to hold, Srichoochat said.

Dee Noree, who owns the Amazing Thailand restaurant in Minneapolis, was elected president of Wat Thai last year. In January, he bought the former Lutheran Church of the Reformation, left vacant more than two years ago.

Within a couple of months, Wat Thai converted the old church into a temple. Monks and volunteers repaired the electricity and plumbing, replaced broken windows and painted over graffiti on the walls. A large golden Buddha and other smaller Buddhas are arranged in the temple’s meditation space.

Much of the renovation was done by the monks themselves, three of whom are assigned to Wat Thai. Dressed in orange beanies and hunting jackets, they cleaned the surrounding property between their morning and evening chanting.

The new tenants have been welcomed by Birchwood neighbors. Margaret Rog, co-president of the Birchwood Neighborhood Association, said residents were happy to keep the church building.

“We’re really grateful ... that the building will remain,” Rog said. “Not only that, it will bring some cultural diversity to our neighborhood.”

Those sentiments were echoed by St. Louis Park Mayor Jake Spano, who along with Rog attended the Thai New Year festival Sunday.

“While one faith community has moved out of that space, another faith community is moving into it,” he said. “It gets to maintain its identity and character as a place of worship.”

A week before the Thai New Year celebration, Rabbi Alexander Davis of Beth El paid a visit and offered the synagogue’s parking lot for the event.

Davis said he hopes to get to know his “Buddhist neighbors” better and that his congregants soon learn their traditions.

“There could be cultural exchanges, education opportunities and there could just be resource-sharing,” he said. “It really is built first and foremost on ... shared understanding and appreciation.”

A glimpse of the future

There is plenty of work left before the temple’s grand opening in 2018. The faded blue paint of the exterior walls continues to chip away, and the lot is little more than packed earth.

Yet the temple was filled with life Sunday, as hundreds moved through for the New Year festival. While most attendees were of Asian descent, there were also many curious friends and neighbors of other backgrounds.

“We invite everyone,” Ple-Plakon said. “As long as you go in there and you want to learn and respect, you’re welcome in Buddhism.”

More than a dozen monks were present, including Phraathikan Prapatphan Ritsakunwong, who moved to Minnesota from Thailand in December.

“I am very excited to be here because not a lot of people visit me in Elk River,” he said in Thai. “I am happy to see neighbors coming by.”

The center hopes to host two more monks in July; Schultz said they will build a house for them within the year.

Schultz, who works at Amazing Thailand, said she was pleasantly surprised at the reception from neighbors.

“People are looking for some way to get to know other cultures and to show that they’re open and accepting,” she said. “And I think we came at a really good time for that.”
TOP