Deerfield Township, MI (USA) -- On a recent Sunday afternoon, approximately 60 members of the Americana Buddhist Temple gathered for a ceremony in honor of two white marble statues of the Buddha that were donated last month. 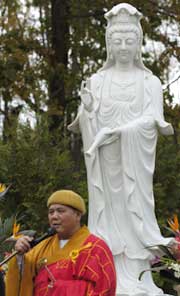 "These statues are very important to the temple," said Abbot Kuan Cheng, the temple's founder. "They inspire Buddhist practices and evoke feelings of lovingness and compassion that are important to Buddhist teachings."

The temple -- which includes a meditation hall, a shrine for higher studies, a dining hall and a small house for meditation retreats -- sits on a hill overlooking 50 acres surrounding Indian Lakes, the former site of Indian Wilderness Park campground. The area was chosen for its serene and quiet atmosphere, essential for meditation, Cheng said.

But the peaceful atmosphere has been shattered by a recent series of vandalisms. In July, flammable liquid was poured on a freshly painted and reconstructed fence surrounding the entrance to the temple and was ignited, said Gregg Schkade, deputy chief at the Hartland Deerfield Tyrone Fire Authority.

Earlier, some of the temple's unique landscaping was destroyed and a sign at the front of the temple was stolen, Cheng said.

"It's unfortunate," said Schkade. "They keep their property beautiful, and they are quiet. They're the perfect neighbors."

The temple was established in this small community of approximately 4,500 residents more than 10 years ago, but few people know where it is or even that it exists, said Township Supervisor Tom Green.

"I talk to people all the time who don't know where the temple is or that there is a Buddhist temple here," Green said. "Latson Road does not get much traffic compared to other roads nearby. But no one has ever expressed any animosity toward the temple."

Americana Buddhist Temple is one of approximately 30 Buddhist temples in Metro Detroit. The temple was founded by Cheng in 1993 in Cleveland and he moved it to Deerfield Township in 1994 when several members began taking jobs in Metro Detroit, Cheng said.

Despite the repeat vandalisms, Cheng and the temple's members -- nearly all except Cheng live in Oakland County -- have never felt unwelcome in Livingston County, Cheng said.

"There are a few troublemakers, and there are prejudices," Cheng said. But there are a lot of people who are caring and show good will toward the temple. Most of my neighbors are very good people. The new statues are reminders of compassion and kindness."

Mahayana Buddhism -- which holds fast to the Buddhist doctrines that were written 2,000 years ago in India about the Buddha, a prince who renounced riches and nobility in order to achieve enlightenment -- is practiced at the temple, Cheng said.

"Abbot Kuan (Cheng) is very unique in his teachings," said Kuo-Huei Chen, a temple member. "He follows traditions and rules that come from the traditional Buddhist sutras, and he emphasizes meditation. His personal style is the best I have been able to find."

Every weekend, a group of five to 15 members gather to maintain the property surrounding the temple, said Chen. "There are lots of things to take care of and it is good to do the work ourselves."

Some Livingston residents donated money and flowers to the temple for repairs after learning about the repeat vandalisms, Cheng said. Five neighbors that live near the temple attended the recent festivities in honor of the statues and were seated at the head table with Cheng during the feast preceding the ceremony.

The ceremony took place outdoors in front of an approximately 10-foot, 7,000-pound statue of Kuan Yin, a Buddha of female form, representing protection. Several feet away was the second statue of a seated Maitreya, the Buddhist saint of kindness. Buddhist teachings and donations like the two statues have helped him overcome being upset by the vandalisms, Cheng said.

"Everyone has a Buddha nature, regardless of their race, language, religion or social status," Cheng said. "All creatures are created equal, so there is no ground to hold grudges or hatred toward another being."

•  Buddhism began 2,000 years ago in India with the enlightenment of the Buddha and spread to China and other areas of Asia 1,200 years ago. Mahayana Buddhism is the most orthodox branch of Buddhism and closely follows ancient doctrines. It focuses mainly on purifying the mind and body through meditation.

•  Americana Buddhist Temple is at 10515 N. Latson Road in Deerfield Township. Services are held on the third Sunday of each month from 2-5 p.m. and are led by Abbot Kuan Cheng. The public is welcome, but the shrine for higher studies is reserved for practicing Buddhists only.