Up the river with a paddle and a boatload of purity

By Justin Malzac and Chad Giblin, The Minnesota Daily, Nov 3, 2005

Introduce yourself to Buddhism and check out a movement for peace and global healing.

Minneapolis, Minnesota (USA) -- You only have to open your eyes to see suffering. It surrounds us and encroaches on our spirit. From hurricanes and tsunamis, to suicide bombings and war, it’s all played out on CNN. The thing that most do not realize is that this is how the world has always been. Well, minus the CNN, of course. There has always been suffering, and for 2,500 years, there’s been a way to overcome it. 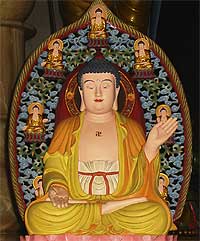 Buddhism is one of the world’s oldest religions still practiced en masse today. The origins of Buddhism began with a man named Siddhartha Gautama, who was born around the year 500 B.C.E. Siddhartha was a prince who, after venturing outside the walls of his castle, saw the untold suffering that all beings in this world must endure.

To find a way to end suffering, Siddhartha undertook many years of diligent training and ascetic practice. Eventually, while meditating under a tree, Siddhartha gained enlightenment and became a Buddha. To help other beings overcome suffering, Buddha taught the Four Noble Truths. This teaching explained that all suffering has a cause within us, arising from our own greed, hatred and ignorance. He then taught many methods of practice which ultimately remove these causes to end suffering. So, by following his teachings, anyone can become an enlightened being, just like Buddha.

This path, while seemingly simple, is a difficult undertaking; that is the reason for Buddhist study. The Minnesota Buddhist Association is a registered student organization at the University that welcomes Buddhists and non-Buddhists alike who are interested in learning more about the Buddha’s teachings. They meet in two separate groups: One discusses Buddhist sutras (teachings of the Buddha) and meets two Wednesdays per month, the other, which is more centered on practice and lecture, meets two Thursdays per month.

The association focuses primarily on Pure Land Buddhism, which is very popular in East Asia, but is still relatively unknown in the West. Pure Land Buddhism is based on several teachings of the Buddha in which he described a “pure land” in the West created by another Buddha, Amitabha. The main practice of Pure Land Buddhism focuses on chanting the name of the Amitabha, which is one of the most direct ways to free the mind of negative thoughts, such as greed, ignorance and hatred, which give rise to suffering. Some practitioners take the Pure Land concept less literally, thinking that the more we rid our minds of these thoughts, the more our world becomes a Pure Land.

A major component of most Buddhist traditions, one that is shared with many other religions, is the concept of dedicating merit. Merit consists of the many good things that we do in life, including that generated as a result of Buddhist practice. Dedication can be directed inward to one’s own enlightenment or outward to include all sentient beings, especially those in immediate need. For example, in the late 1970s, two American monks Heng Sure and Heng Ch’au, both disciples of late Ven. Master Hsuan Hua, undertook a pilgrimage from Los Angeles to Northern California. Throughout the course of this two-and-a-half-year and 800-mile trip, they took three steps and then bowed, making a full prostration to the ground, dedicating all merit to world peace. More recently, after the tsunami in Asia last December and the recent hurricanes in the U.S., many Buddhists “pledged” to recite a certain number of mantras to help ease suffering as a result of these terrible events.

Listening is also an important part of the meetings. The group listens to webcasts of weekly talks given by the Rev. Heng Sure, who is now the Abbot of the Berkeley Buddhist Monastery in California. The core of the lecture is clearly a Buddhist teaching, however, the discussion and story-telling is, for the most part, non-denominational. The associations meetings are a good chance to meet other people who may share your views, or even expand your religious and philosophical horizons. This year we again are fortunate to welcome the Rev. Heng Sure back to the University. He will have two speaking engagements from 7 to 9 p.m. Friday at the St. Paul Student Center and from 1:30 to 5 p.m. Sunday

Friday night he will host “Q&A” and introduction to Buddhism. The Sunday lectures will focus on repentance and reincarnation in Buddhism, as well as ideas for applying Buddhist principles to modern life. On Saturday, an all day practice-oriented event will take place at the Vietnamese Temple in Blaine at 10030 Third St. N.E.

For more information and a full schedule, log on to the Minnesota Buddhism Association Web site at: www.amitabhamba.org.