Minneapolis, USA -- Nima Lhamo feels a sense of peace when she kneels on the dusty throw rugs inside the Gyuto Wheel of Dharma Monastery, but she longs for something more. 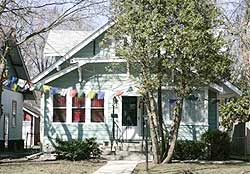 << A older home in south Minneapolis, shown Wednesday, April 12, 2006, serves as the home of the Gyuto Wheel of Dharma Monastery. Gyuto worshippers have been working toward a new monastery in which to worship and hope a Minnesota visit by the Dalai Lama will draw attention to Tibetan Buddhism and their monastery project. (AP Photo/Jim Mone)

The Buddhist temple that serves the second-largest Tibetan refugee community in the country is an old turquoise-sided house on a busy street -- not the grand gathering place of a faithful Buddhist's dreams.

"Tibetans are having a hard time without a (permanent) place to worship," said Lhamo, a Robbinsdale, Minn. woman who prayed at the monastery with her husband earlier this week. "At times, I want to ask the people from 'Extreme Makeover' to come here and fix it up!"

Gyuto worshippers, who have been working toward a new monastery for years, make do with what they have. But they hope a Minnesota visit by the Dalai Lama will draw attention to Tibetan Buddhism and their languishing monastery project.

"Maybe by just being here he can do something for us," said Tashi Namgyal, one of five monks who live and work at the monastery.

The Dalai Lama, the exiled spiritual leader of Tibetan Buddhists, plans to speak in Minneapolis on Sunday and on Monday in Rochester at the Mayo Clinic, where he will also have a routine checkup.

He visited Minnesota in 2001 at the request of the state's Tibetan community of about 1,500 people, which is concentrated in the Twin Cities.

Gyuto has been raising money for a permanent monastery nearly since Tibetans began arriving in Minnesota more than a decade ago. In 2001, the actress Jessica Lange and playwright Sam Shepard -- Minnesota residents then -- headed a $50,000 fundraiser. Last year, a Tibetan cultural center in St. Paul raised another $26,000, and individuals have thrown in thousands more. 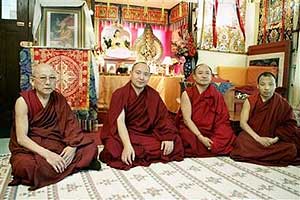 Tibetan monks, from left,  >>
Gendhun Kelsang, Abong Rinpoche Lobsang Tenzin, Tashi Namgyal and Konchok Phuntso pose Wednesday, April 12, 2006, inside the Gyuto Wheel of Dharma Monastery that is located in an old house in south Minneapolis. Gyuto worshippers have been working toward a new monastery in which to worship and hope a Minnesota visit by the Dalai Lama will draw attention to Tibetan Buddhism and their monastery project. (AP Photo/Jim Mone)

The sale of a Columbia Heights house that once served as the monastery, along with another fundraising drive, may help them move to a permanent place in a year or two, Namgyal said.

When the Dalai Lama visited five years ago, he spoke before packed houses at Williams Arena and Northrop Auditorium and also addressed the Legislature. Money raised during that trip went to the Tibetan American Foundation of Minnesota, which used it to establish the cultural center, according to executive director Karma Wangchuk.

Neither the cultural center nor Gyuto expects to collect money this time, but it's hoped the Dalai Lama's visit will raise awareness about Tibetans in Minnesota and the Midwest.

Inside the Gyuto monastery along Minnehaha Avenue in south Minneapolis, red drapes keep out much of the light. Red and orange banners adorn the walls, leading to an altar with the likeness of Buddha and a picture of the Dalai Lama. Well-worn throw rugs cover the floor.

Tenzin Chodak, who is married to Lhamo, grabbed a pillow and knelt on the floor as he talked about the importance of the Dalai Lama's visit. "I feel like my grandfather is coming," he said.

The Dalai Lama -- who fled Tibet in 1959 when Chinese communist forces occupied the country -- said recently that he wants to travel to China on a pilgrimage.

In his Minnesota trip five years ago, the Dalai Lama touted democracy, human rights and scientific advances. This time, he plans to talk about practices that encourage a peaceful mind and positive ways to live during difficult times, according to the Mayo Clinic. His speech at the Minneapolis Convention Center, meanwhile, will be delivered in the Tibetan language to Tibetans from across the Midwest, Wangchuk said.

Whatever topic he chooses to discuss, few Tibetans plan to pass up a chance to see their spiritual leader. Namgyal said he once saw the Dalai Lama in India several years ago but hasn't seen him since.

"If he says something for us to do, we will follow our teacher," he said.