Cincinnati, Ohio (USA) -- Some dancers aim to entertain their audiences. Others want to titillate. But the eight Tibetan monks performing Saturday at the Cincinnati Museum Center have a more altruistic goal, to nudge viewers along the path to spiritual clarity. 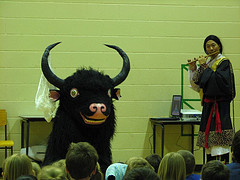 Heady stuff. And to many Americans' ears, probably a little suspect. After all, everyone is after something, right?

That's lesson No. 1 about Tibetan Buddhism - it's about the search for enlightenment and wisdom, not profits.

"Our motivation is just to go and help the people," says Lobsang Sonam. He's the 79-year-old leader of the group of monks whose world tour brings them to Greater Cincinnati and Northern Kentucky for two weeks of activities. Speaking through an interpreter, he adds, "We are a resource. We didn't come here to proselytize."

They did come here to raise money, though, although even that is tied to a selfless project. Sonam and his colleagues are here to get support for the Gaden Shartse Monastery, founded by Tibetan exiles living in southern India since China invaded the tiny Himalayan nation in 1959.

"The most important thing for us is that audiences experience and understand the culture and art of Tibet," says Sonam, who was born in the Tibetan capital city, Lhasa. "In this way, perhaps, they will understand more fully the Tibetan cause."

Don't expect programs filled with political diatribes or social invective. Tibetan Buddhism is a philosophy committed to nonviolence. Indeed, the very idea of accumulating power is regarded as something of an oddity.

"Everything about the life we know here is impermanent," explains Sonam. "So gathering anything, whether it is might or possessions, is ultimately not very productive."

The monks will be constructing sand mandalas, elaborate and colorful geometric designs made to aid meditation. And they'll be dancing. Some, like Dance of the Skeletons Lords, explore somber subjects - in this case, the impermanence of life.

But others, says Sonam, are decidedly amusing. Take the Yak Dance, which honors the massive, buffalolike beast that provides everything from butter to hides.

"People in the United States are very shocked by the yak dance. They know the yak is very, very big, but ..." He pauses and lightly cackles. "When they see how silly the yak can be ..." He pauses again and giggles at the memory of a yak dancing. "You must see it - it's very amusing."