Ottawa, IL (USA) -- As a fifth-grader, he wrote a letter to President Nixon, in hopes to stop the Vietnam War because it was "good for the peace." But he didn't stop there. 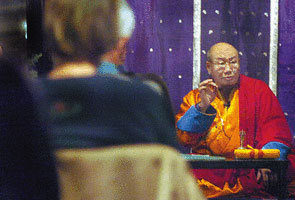 << Buddhist monk Baasan Lama speaks to his audience on the art of meditation at Hegeler Carus mansion Thursday night. After the communists tried to dominate Mongolia, Baasan Lama and twelve others embarked on a non-violent resistant movement that led to the country retaining its freedom. At his talk, Baasan Lama wore an orange robe with blue cuffs and a red sash.
Photo: Tom Sistak

Baasan Lama, a monk from Ganden Monastery in Mongolia, took part in the movement to free the country, which is located between China and Russia in Central Asia, from Soviet domination in 1990.

During his second visit to the United States, he gave an overview of his experiences as a monk and provided insight to about 80 audience members on the art of meditation at the Hegeler Carus Mansion Thursday night.

At 19, he went to the Central Monastery to become a monk, said his translator.

"Since I was a kid, I've been interested in traditional Mongolian letters," he said. "When I first started, I learned the history of Mongolia, which is a big part of the (Buddhism) religion."

In the 1930s, he said, Russia attacked the monastery and Buddhism disappeared for several years.

"We lost a lot in Buddhist culture," Baasan Lama said. "For seven years, there were no monks."

A big part of the culture, he said, is meditation, which involves chanting a mantra.

A mantra is a phrase that is believed to hold magical power to pay tribute to a higher power.

"The human is body, speech and mind put together," he said. "With the mind, people always want more than they own."

He said last century was the one where people focused on money and objects, but the year 2000 marked the beginning of the century of meditation.

"The location of astrology plays a part in it. You get the energy from the sun, the moonÉ it makes people think clearly," he said.

Through meditation, one can positive energies or negative ones, and that can affect how one behaves.

"Breathing holds peoples energy, their spirit," he said. "If it goes to a bad part you will think bad things, or do bad stuff,"

Baasan Lama also said there are different forms of meditation.

"One kind is sitting for five or six minutes and not thinking about anything," he said. "Or another kind is while you are on a bus or shopping you can be thinking it."

As Baasan Lama prepared to chant three mantras, he explained the meaning of each one, then recited the words, and had the audience repeat it to him.

The final mantra, called "Green Tara Mantra," is chanted to focus on the past, present and future, and is also called a mother mantra.

He said when the mantra was created a mother's most important role was giving her child a mind and a good education, and was like a teacher to the child.

Over the years, the priorities have changed however.

"Today mothers say 'I pay tuition and I feed them,' " he said. "Their most important role should be a life education."

Sharon Wagenknecht, executive director at the mansion, said the mansion's foundation did not sponsor the event and she felt very lucky to have Baasan Lama come and speak.

"Paul Carus had invited several buddhist monks, and it was gratifying to continue that legacy."

Baasan Lama said through the continuous practice of meditation, one can become more like Buddha and become a god themselves.

"Coming today is the seed of the plant. When you read the mantra, it will be like growing that plant," he said.