TOWN OF DUNN, WI (USA) -- In a part of her heart and mind, Ani Lhundub Jampa is still a dancer, although she has not sung or turned a pirouette for years. Her life is one of unusual balance, sometimes caught between faith and realism, respect for tradition and the trappings of progress. For eight years, Jampa has been a Tibetan Buddhist nun and her community's bridge between old and new worlds. 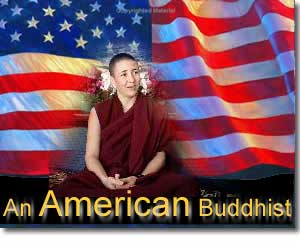 "I didn't expect serving the teacher and the community to take this form," says the 36-year-old Milwaukee area native, her voice both energetic and gentle. It is about "putting on a hard hat and learning construction" as well as being administrative assistant for Geshe Lhundub Sopa, the 84-year-old abbot at Deer Park Buddhist Center.

This 12-acre Buddhist community, at 4548 Schneider Drive, near Oregon, has begun the $6.1 million construction of a temple whose craftsmanship will blend Eastern and Western excellence.

"Slowly, we will make ourselves more well known," says Jampa, who sees the temple as a sacred space for worship and teaching, a point of pilgrimage and retreat, and a tourist attraction but not a circus of activity.

The architect is Eric Vogel of Milwaukee, Jampa's brother, who worked with Sopa to produce traditional temple proportions and symbols while utilizing modern building methods and materials. It is Vogel who introduced his sister to the Buddhist culture. 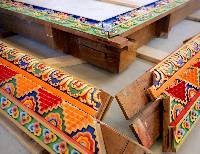 "He traveled extensively in Asia," Jampa says, "and his letters were inspiring."

So inspiring that at age 20 she swapped modern dance for studies of Tibetan language and culture, while a college student in Colorado.

"I never really had academic aspirations," she says. Her desire for "a deeper level of scholarship" was to enrich her own spiritual practice, and the search led her to Nepal.

It was at a Buddhist community outside of Katmandu that Jampa, who then was known as Alicia Vogel, learned of the Tibetan community close to her hometown. Monks told her about Deer Park and Geshe Sopa, describing him as one of the world's most respected Tibetan Buddhist teachers.

So the student headed back to Wisconsin for graduate school and Ph.D. work, enrolling in Sopa's classes at the UW and working as his teaching assistant. She approached her teacher about becoming ordained "the vows do not require a specific level of study, but a conviction to a lifestyle" and he discouraged her the first year, then the next. Sopa chuckles when reminded of this.

"This kind of thing is not decided in a few days," he says of ordination. His student was young and had long hair, he recalls. Would she really want to relinquish the possibility of driving a nice car, owning her own house, having a baby?

"He thought I'd give back the vows after a while, and he didn't want to see that happen," Jampa explains.

Like the four monks who live at Deer Park, Jampa has a shaved head and wears a monastic shamtab, a traditional floor-length, maroon garment. The way it is worn is full of symbolism: The clothing folds one way, to be open to positive states of mind. Another fold is a reminder to turn away from negativity.

"It has opened up more for me," Jampa says of her monastic lifestyle. "The heart and mind are more spacious" and what she sees is more freedom, not more restriction.

Life at Deer Park is structured yet uncluttered, but with access to cell phones and the Internet. It is not a monastic community that generates income from a cottage industry, such as soap or bread production.

Donations to Deer Park are what pay the bills and there are no paid positions. Jampa says the community exists because Sopa used his wages from 30 years of UW teaching to create it. Jampa is one of three nuns associated with Deer Park and the only one who works there full time. She lives in a small house that is next to the monastery and says her parents, Frederick and Anne Vogel, are among the donors who financially support the community.

"I'm sure a lot of friends from high school are amazed that I am a Buddhist nun," Jampa says, smiling, when pressed. As a teen, her goal was to study ballet in New York, but her parents disapproved, seeing it as a harsh and overly disciplined life.

Today Jampa says her biological family, which is Christian, is supportive of her choice of career, "even though Buddhism is quite foreign to them." They asked her "to think for a year" before proceeding with ordination, and she did.

"I'm an American who has taken the vows of the Tibetan tradition," Jampa says. "I want this to be American Buddhism."

She sees similarities between the discipline of dance and meditation. The latter is a part of her daily regimen, and yoga keeps her body fit.

"It is a special place because of Geshe Sopa," Jampa says of Deer Park. The two recently returned from a trip to Taiwan, where Sopa taught Tibetan Buddhism classes.

"She is very, very useful," Sopa says, "not just to me, but to our community."

This summer they will go to Germany, where Sopa will observe discussion about whether Tibetan nuns should be able to pursue equal footing with the monks, as they did at the religion's beginning.

Some nuns "will go to other countries to receive full ordination," Jampa notes, but "I'm a little less radical," preferring to wait until others decide what is possible in Tibetan Buddhism. Full ordination means abiding by more than 200 vows, in addition to the 10 she already follows as a nun.

"I think, in this day, it may be appropriate" to allow nuns access to full ordination, Sopa says, particularly since it would restore what once existed in Tibet.

During a simpler time, Jampa would devote her days to meditation, reading prayers and enabling interfaith dialogue.

"I'm wearing too many hats at this point," she says of her sometimes chaotic days, but "this temple will benefit so many people."

Until now, "I never thought the life of a nun would be about running a business," she says, acknowledging that Deer Park is "a very small community and in some ways quite inexperienced with the larger matters of the world."