Grand Rapids, Michigan (USA) -- Somewhere in the world is a place where cell phones cannot reach, the air is pure, water comes from a river and people pray all day. It is called Sky Jewel Village, and Skip Clarke wants to save it. 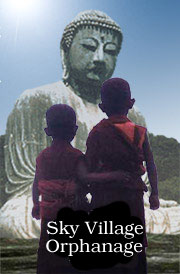 The East Grand Rapids man spent two weeks in this Chinese mountain village last year. There he saw a pristine way of life, unspoiled by pollution and filled with the faith of Tibetan Buddhism.

"I felt, 'I'm finally in the real world. This is what people are really like,' " Clarke recalled in his parents' home near Breton Avenue SE.

Help at the top of the world

After years of seeking spiritual enlightenment, Clarke found something else: a place that already had it, but needed his help.

So he is setting up a U.S. foundation to fund an orphanage and school near the roof of the world. At 16,000 feet, Tibet is the highest region on Earth.

Working with Tibetan monks in China, Clarke hopes to help village children preserve their Buddhist culture while preparing them for the modern world heading their way.

"We want to be proactive and set the village up so it can go into the future and maintain all those good things, and get some of the positive things from modern culture," Clarke said of the World Hope Foundation. "There's nothing wrong with a toilet here and there and a light to read by at night."

He hopes people from West Michigan will join his quest. Area residents have much to offer and even more to learn from this tiny village of yak herders, he believes.

Living in Sky Jewel Village did that for Clarke.

It also helped him through the grief of losing his father, providing a way to honor his legacy of generosity.

Robert Clarke taught political science at Aquinas College and Grand Valley State University. He also was an activist who founded the national Citizens Bee student competitions and believed in the power of government to do good.

His son calls him "one of the nicer guys to walk the face of the Earth." When Robert Clarke died last July at age 77, Skip says he was "crushed."

"I wanted to make a new start, go somewhere I'd never gone before," said Clarke, 41.

The East Grand Rapids High School grad already had studied in Japan while attending GVSU, leading to a career as a translator. Also fluent in Chinese, he lived for about 15 years in Japan and Taiwan, translating, tutoring and working for a power company and manufacturing firm.

He moved back to the U.S. two years ago, working mostly on the road for Toyota. Raised Catholic, he has long studied Buddhism and Eastern thought.

His desire for a new start last summer took him to a mind-body-spirit healing center in Brazil. There he met a prominent lama, or spiritual teacher, from a Tibetan Buddhist monastery in China. The lama gave Clarke helpful perspectives on his father's death, and Clarke began translating for the teacher.

Under the lama's guidance, Clarke was ordained a Buddhist. The lama invited Clarke to visit his monastery in west central China. Clarke readily accepted, arriving in November.

Because of the sensitive political situation between Tibetan Buddhists and China, Clarke does not want the teacher or his monastery named. China seized control of Tibet in 1959, subsequently destroying thousands of monasteries and killing hundreds of thousands of Buddhist monks and nuns. The ruling Dalai Lama fled to India with other Tibetan officials and set up a government in exile.

Tibetans long for the return of the Dalai Lama, who begins a U.S. tour in April. While he pushes for greater autonomy, others demand outright independence and freedom from Chinese interference in their religion.

Clarke steers clear of political discussions, focusing instead on the needs of the gentle Tibetans he encountered in the mountain village. It is in Qinghai province, part of the greater Tibet claimed by exiles but outside the autonomous Tibetan region defined by China.

"This is a place to make good people," Clarke said of the village of about 1,400 people. "There are no distractions, and they have a very spiritual orientation towards life."

It is the home village of the lama he met in Brazil. Clarke and his party detoured there after being snowed out of the lama's monastery. En route to the village, monks chanted and poured sake out the Jeep window to ask guardian deities for help, while the Chinese driver played rock and roll.

Clarke was the first Westerner to set foot in Sky Jewel Village (translated from the Tibetan). Villagers were fascinated with the 6-foot-4 fair-haired American. They showed him how to eat yak meat. He quickly felt comfortable in their rustic homes, huddling with them around stoves fueled by yak manure.

"It was a lot nicer than civilized life in many ways," he recalled. "It had not been subject to physical or spiritual pollution."

He routinely saw people chanting and spinning their prayer wheels. Prayer flags fluttered everywhere. People showed compassion and kindness toward each other.

But he also saw children who did not know basic Chinese characters or the Tibetan alphabet. "Economic orphans" moved from house to house for as long as families could afford to feed them.

Their eyes spoke of uncertainty and need.

"They need the things we have. They need a stable, loving environment. They need to wake up in the same bed every day."

His friend, the lama, had an idea.

"Let's try and help these kids," the lama said. He suggested Clarke return to America and raise money to build a $250,000 orphanage and school to be run by a village monastery.

"It seemed like mission impossible, but I said 'I'll do my best,' " Clarke said.

That turned out to be pretty good. After sending out hundreds of e-mails, he received one from a businessman in Akron, Ohio, offering to set up a nonprofit foundation and head up the fundraising.

Bob Warther has received approval from the state of Ohio to set up the World Hope Foundation. Non-profit status from the IRS is pending, Warther said in an e-mail.

"I saw it was something that would be easy for me to accomplish and most meaningful to those kids who have no means to help themselves," said Warther, a Christian who runs a wealth management business.

About $15,000 already has been raised for expenses including hiring teachers, buying supplies and setting up a yak ranch for the kids, Clarke said. He hopes support will come from West Michigan, whether financially, as volunteer teachers or in spreading the word.

Others in Michigan are helping communities in Tibet with projects such as clinics and schools, said Glenn Freeman, administrator of TIBETmichigan. He spoke with Clarke about his project.

Freeman cautioned Tibetan Buddhism is not "something from the past" but is perfectly compatible with modern society. And while not familiar with the details of Clarke's effort, he said aid to any people beyond food and water should depend on them.

"It's up to the people who live in that area whether they feel it's useful for them or not," Freeman said.

Clarke said many people in the village welcome the orphanage.

"They said, 'Do that, that will give us a future. We have to get connected to the outside world (and) make a better life for ourselves.' "

He has organized a tour in July for those who would like to contribute. To do so, he believes, would do Westerners a world of good.

"For all the hardship and poverty I saw in Tibet, I believe that people in this country in this community are suffering more. I think we have a lot to learn from them about how to remove the stress and depression so prevalent in our culture."

"We've got to move (the village) in a direction, or it will be moved for us," he said. "In three years, they'll be able to make cell phone calls."