Kent, Ohio (USA) -- Clad in bright orange robes and sandals, two Buddhist monks from the Pittsburgh Buddhist Center came up the sidewalk that led to the Kent home of Mahinda and Samantha Gangoda. 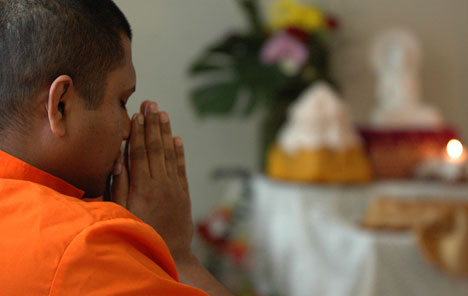 << PHOTO BY LAURA TORCHIA | DAILY KENT STATER<br>Priest Kamburupitiye Munindawansa offers a prayer to Lord Buddah before he addresses the families that gathered at the Gangoda home.

Mahinda, a Sri Lanka native, is an adviser to graduate chemistry students at Kent State and a follower of Buddhism.

Mahinda carried a figure over his head called a datu that was elaborately colored and decorated. The datu is said to contain the remnants - such as teeth or ashes - of monks who represent the founder of Buddhism, Lord Buddha, Samantha said.

The Buddhist alms ceremony took place on a Saturday morning in late March when about 35 to 40 people, mainly Buddhists, gathered for a merit giving event of rebirth for three relatives who had died. The ceremony was also in honor of their death anniversary, Samantha said.

The purpose of the alms-giving ceremony is to give merits to the souls of those who have died so they have a better life when they are reborn, said doctoral chemistry student Asanka Wijekoon.

"The ultimate goal (of Buddhism) is to live without desire," Mahinda said. "Then there is no more rebirth."

"The main thing is giving."

The alms giving is done by giving offerings of food and drink to the monks, who conduct the rituals for the deceased, Samantha said.

After arriving, Chief priest Nahinne Ariyagnana and priest Kamburupitiye Munindawansa sat on a couch that had been covered with white sheets said to represent cleanliness, Mahinda said. Guests were seated on the floor.

"We believe that the monks are pure," Mahinda said. "So when they come we want to offer them cleanliness."

The chanting and teaching the monks use throughout the course of the event varies from Sinhalese, the Sri Lankan spoken language, to the written Sanskrit language, Samantha said.

After the food offering to the monks, members of the event ate.

"The main thing is giving. Giving and sharing," Samantha said.

A way of living

After the alms giving, the monks held a teaching session for the children and then for the adult guests.

Samantha said the reason for the teaching session is to give the children a basic understanding of Buddhism.

Monks are common in Sri Lanka, but not in Ohio, she said, so the teaching of children is more important here because the monks so rarely have a chance to meet with children. As they began teaching the children, the chief priest Ariyagnana pulled out the Buddhist flag for the children to identify.

Ariyagnana said the flag stands for enlightenment and different races of people.

"We grew up with (Buddhism) and it can be applied to life," said Thisanjali Gangoda, freshman biological science major and the Gangodas' daughter.

"It is a way of living - a philosophy," she said. "I enjoy the experience (of the alms giving)."