MADISON, Wisconsin (USA) -- The Dalai Lama said Friday the Tibetan people would live in harmony with the Chinese if the ruling Communist Party would allow them to govern themselves. 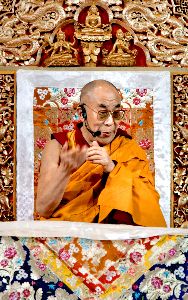 << The Dalai Lama speaks on an ornate gilded throne

Sitting with his legs crossed on a golden throne in a red robe, the 71-year-old spiritual and political leader of Tibet in exile told 12,000 people at the Kohl Center that he continued to believe a solution over his homeland was possible.

"Please give us meaningful autonomy," he said in a plea to the Chinese, who have accused him of trying to split up their country.

He said independence would actually help the government maintain "unity and stability and prosperity and through that way, harmony."

China says it has ruled Tibet for centuries, although many Tibetans say their homeland was essentially an independent state for most of that time. Chinese communist troops occupied Tibet in 1951 and Beijing continues to rule the region with a heavy hand.

The Dalai Lama, who fled Tibet in 1959 after the Chinese quelled a popular uprising, said the Chinese rulers "are people who have no idea about Tibetan culture, Tibetan spirituality and the delicate situation of the Tibetan environment."

"The present situation is actually no guarantee for preserving the Tibetan culture and spirituality," he said.

He said that in Tibet, "political education means criticism of the Dalai Lama and absolute loyalty to the Communists."

The remarks came in response to a question near the end of a 90-minute talk on the University of Wisconsin campus where he preached his message of tolerance for other people and religions.

He drew applause when he said he remained optimistic the world would eventually end terrorism and war through compassion, forgiveness and kindness.

"I will always believe that many problems we are facing today are man-made problems. Therefore, logically those problems which are our own creation we must have the ability to solve," he said. "With our determination and effort, I think this century should be more peaceful, should be more compassionate and should be more happy."

The crowd ranged from Buddhist monks in red robes to activists fighting to free Tibet to students and professors. Many said they came to see the man they consider a "rock star" for peace and left inspired.

"It was very powerful. It gave me a lot of hope and a motivation to do something about it," said Sandeep Lama, 28, a small-business owner who moved to Madison from Nepal. "It starts with yourself and how you deal with things on a daily basis."

The Dalai Lama has long had a close relationship with Madison, which has a relatively large Tibetan community of about 500 people. His arrival Wednesday marked his sixth visit to the area since 1979.

He spent the week visiting a $6 million temple being built outside of Madison at the Deer Park Buddhist Center and Monastery, the site where he performed a historic ceremony for world peace in 1981.

Deer Park is among the most prominent Buddhist centers in the U.S. and is run by Geshe Sopa, who the Dalai Lama asked to come to the U.S. in 1959 to spread his vision. Sopa became the first Tibetan to win tenure at a U.S. university, teaching Buddhist philosophy and culture at UW-Madison for 30 years.

The Dalai Lama had private meetings Thursday with Gov. Jim Doyle and two state lawmakers who had sponsored a resolution declaring March 10 "Tibet Day" to commemorate the 1959 uprising against Chinese rule and call for Tibet's freedom.

That resolution and the Dalai Lama's trip angered China's ruling Communist Party, especially after the city agreed to fly the Tibetan flag over City Hall this week.

"The purpose of Dalai Lama's visit to the United States this time, as always, is to engage in activities aimed at splitting China and undermining China-U.S. relations under the cover of religion," Zhiyuan Ji of the Chinese Consulate in Chicago wrote in a letter to Mayor Dave Cieslewicz. "The Dalai Lama issue is very sensitive."