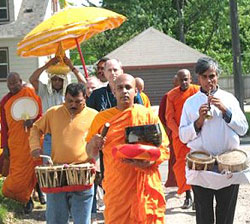 Among the participants were members of both Buddhist and non-Buddhist communities - Sri Lankans, Americans, Vietnamese, Burmese, Indians, Indonesians, and neighbors of the Temple on Webster Street in Fort Wayne.

The festival started with a colorful procession (Perahera). A large Wesak lantern was lit with 90 small satellite lanterns (Wesak kuduwa) accompanying it. A pandal that displayed the four symbolic encounters was another attraction. Dinner was served to all participants in a "dansala".

Venerable Thalangama Devananda Thera is the chief monk at the Indiana Buddhist Temple. The temple which opened in 2003 has hosted several religious and cultural events since its inauguration.