New life in a new temple

As a temple welcomes the public, honoring Cambodian Buddhist heritage, Kunmony Hang will reflect on his journey from sullen teen to novice monk.

Hampton, Minn. (USA) -- His parents had divorced. Classmates picked on him because of his lanky build, his name and ethnicity. His grades hit bottom, and a funk seemed to hang over every moment at school, tempting him to drop out. 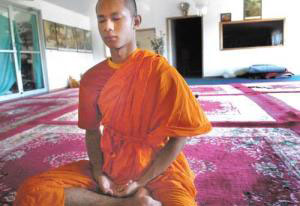 But when Kunmony Hang's guidance counselor suggested he see a therapist, the sophomore from Lakeville South High School had his own ideas. Instead, he would study to become a Buddhist monk.

"I went through some hard times," said Hang, 15, walking in the shadow of the Watt Munisotaram, Minnesota's largest Cambodian Buddhist temple, an orange monk's robe draped around his thin frame.

The temple, 60 feet tall and elaborately decorated from end to end, has become a spiritual wellspring for Hang, a novice monk living among seven Buddhist scholars. This week, its doors also will open to the general public, inviting a rare peek into a culture that faced brutal oppression at the hands of Cambodian leader Pol Pot and the Khmer Rouge.

Under construction since 2002, the $1.59 million structure on Minnesota 50 in rural Hampton, about three miles east of Farmington, is said to be among the largest - if not the largest - of the 84 Cambodian Buddhist temples in America. A smaller temple operates in Rochester, Minn.

Beginning Thursday, the Hampton site's four-day inauguration will draw as many as 100 monks from as far as Australia, France, New Zealand and Cambodia. For Hang, the ceremonies will mark a rebirth and renewal of his cultural roots, and, for the 6,000 to
Advertisement
9,000 Cambodians living in Minnesota, at least a symbolic turning point.

The inauguration events - part religious ceremony, part ribbon-cutting, part festival - will consecrate the structure and the giant bronze Buddha on its upper level. On Thursday morning, Hang will join novices from other parts of the country in a monk "parade," circling the holy site as older monks are ordained.

For Hang, it will be a proud display. Visitors over the weekend might number in the thousands.

"We expect to have so many people because the consecration of a temple is really a rare event for our community," said Yanat Chhith, a leader in the Minnesota Cambodian Buddhist Society Inc. and former analyst with the Minneapolis Federal Reserve Bank.

"It only happens when we build a temple, and that's something that might not happen in some people's lifetimes," he said.

The temple's official ribbon-cutting is scheduled for 1:30 p.m. Sunday. Afterward, the monks will perform the Sima boundary ceremony, where nine heavy stone markers are placed into vertical shafts, delineating the religious grounds. There will be music, food vendors and live performances after 6 p.m. Friday, Saturday and Sunday.

The new structure sits on a hilltop overlooking the monks' house and a scenic 40 acres of rural land, purchased in 1988 by the Minnesota Cambodian Buddhist Society. The house, which was later expanded to include a shrine room, has served as living quarters and a temporary holy sanctuary.

The two-story temple was started in 2002. On Wednesday, volunteers were busy painting its exterior, adding cement plaster to long sculptures of snakes and dragons running the length of each outer stairwell and putting finishing touches on the downstairs social hall.

Living here "changed how I used to be," said Hang, recalling fistfights with teens who teased him about being one of the few Asians at previous schools in Farmington and Burnsville. "I came here, I was pretty much on a bad
path. I'm more respectful and pay more respect to elders."

With special permission from Lakeville South, Hang spent April living with the monks and then returned after classes let out in June. He expects to stay through the end of July and perhaps come back for a year after he completes high school.

Buddhism allows "part-time monks" to serve for as little as a week, and Buddhists in some countries, such as Myanmar, require brief periods of monasticism for all boys.

"Most Cambodians, most of the young kids, they're into 'gangsta' culture," Hang said. "I used to be like that, too. It's really fun. But my dad said, you're (my) only son. You've got to continue the last name. But I got C's and D's."

Hang's daily routine begins with prayers at 6 a.m., followed by a light breakfast of rice soup and fruit. He spends the rest of the morning in solitary chants and preparing the temple grounds. His evenings are devoted to reading Buddhist teachings.

Lunch is always served before noon - the last meal of the day. With their light diet, the monks emulate Buddha, who abandoned his princely upbringing for an ascetic lifestyle and reached enlightenment at age 35.

The temple inauguration will be a first for Hang. He has little recollection of Thailand, where he was born, and speaks the Cambodian language of Khmer only haltingly. It also will be a first for many of the grown children of refugees displaced by the Khmer Rouge, who held power in Cambodia from 1975 to 1979.

Led by Pol Pot, the Khmer Rouge's systematic torture, execution and forced labor killed an estimated 1.5 million Cambodians, according to U.S. scholars, and twice that many by other counts.

The oppression targeted religious leaders of all stripes - including Cambodian Christians, Muslims and Buddhist monks. Monks who died under the regime are remembered with a long series of portraits at the Watt Munisotaram.

Many Cambodians first fled to resettlement camps in Thailand, and then immigrated to the United States in large numbers in the 1980s. Minnesota - with more than 6,000 Cambodians, according to the U.S. Census - is home to the sixth-largest community in the U.S., after California, Massachusetts, Washington state, Pennsylvania and Texas.

Chanda Sour came to Minnesota as a 9-year-old with his mother, grandmother and aunts after his father was slain by the regime.

"My generation, I don't know a lot of this stuff here," he said, eyeing the Hampton temple's large, colorful wall panels depicting the Buddha's origins.

Today, the 34-year-old financial adviser from Eagan is an active volunteer with the Buddhist Society, which has received donations from around the country.

"We thought Minnesota was going to be the same as Cambodia, a hot climate," Sour said. "We didn't know there were different states."

But the temple isn't just a symbol of cultural pride. For Sour, it is a symbolic step toward cultural and economic stability for the thousands who have built new lives in the U.S.

"Who would have thought in Minnesota," he asked, "in the little town of Hampton, we'd build a temple?"

The Cambodian-Buddhist Temple in Hampton by the numbers:

Celebration of the temple begins Thursday, with entertainment Friday, Saturday and Sunday nights, beginning at 6 p.m.