Hamtramck monks save energy with a green remodel

Detroit, MI (USA) -- It probably goes without saying, but Buddhist monks look wildly out of place in a metal scrap yard. And, upon entering one, you can only imagine how the barely contained chaos of one of these places must feel for ordained monk Hilary Moga (her Buddhist name is Myung Ju Sunim) and monk-in-training Luke Niewiadomski (Sosan), who've just arrived from the relative peace and quiet of their home, the Detroit Zen Center, a Buddhist monastery near downtown Hamtramck. 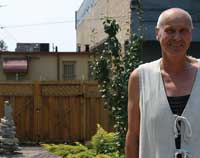 << On the path, off the grid: Zen Center founder Sahnbul Sunim. (Photo by: Lindsey Muliolis)

Clearly, the scrap business is good in Detroit, a city that doesn't lack for unused iron, copper and steel. The perimeter of this east side scrap yard on Mt. Elliot is marked by a 30-ft. wall of bicycles, washing machines, bar stools and just about anything else that's easy to move. An excavator moves the junk from place to place as it's added to the pile, resulting in a deafening cacophony of scraping and grinding metal. Scrappers in pick-up trucks move around the yard, bringing in new loads of precious trash, and many of the employees scattered about the yard seem to be there only to scream at them.

This is no place for serenity.

But Moga and Niewiadomski have brought serenity anyway. Even as one man, who appears to be the manager, condescendingly and unnecessarily loudly barks orders at them, the two Buddhists, true to form, remain placid, replying in a friendly NPR-ish voice, while wearing half smiles.

They've also brought with them $80 worth of a used furnace, which was, until recently, another resident of the Zen Center. It had been for more than 60 years. But the huge, clunky and energy-inefficient model will soon be replaced as part of the monastery's ambitious "green renovation" project, a complete overhaul of the facility aimed at maximizing its environmental sustainability.

Moga, the Detroit Zen Center's director, beams as she pockets loot from the scrap yard.

"No wonder so many people do this in this town," she says.

It's a little after noon when Moga and Niewiadomski return from the yard to the Zen Center at the corner of Mitchell and Casmere streets in Hamtramck. They've already had a full day. The monastery members, called monastics, are required to wake up at 4:30 a.m. for morning meditation — "That was the hardest part for me when I first came here," Moga says — followed by an hour and a half of personal time. Then, they work on the renovation from 8 a.m. to 5 p.m. several days a week. Volunteers come at 6 p.m. to help with the work, sometimes staying until after midnight.

Right now, the members are preparing for the most visible part of the project, the construction of an outdoor courtyard surrounded by a wooden structure called a jidibang. The structure will serve as a reception and outdoor meditation center for the monastery. It will be covered with a "green roof," a rooftop garden similar to the one put into the Ford Rouge complex in 2004. The lights installed in the jidibang will be powered entirely by solar panels.

The reception area is designed by New York-based architect Thomas Garland. Garland says his main goal for the project was to design an aesthetically pleasing connection between the two buildings that make up the Detroit Zen Center. The Zen Center is divided into two parts, a 3,000 square-foot house and a 4,000 square-foot meditation hall, one large rectangular room where the members hold free meditation sessions and yoga classes. The buildings are connected through the basement, a dark, cluttered storage space. The entire concept for the courtyard and jidibang, says Garland, was worked out in one night.

"Connection has always been rather confusing in those buildings. They connect only through the basement," he says. "The solution appeared to be quite obvious."

Construction on the jidibang structure is set to begin this week. The majority of the building will be reworked by monastery members and volunteers. It's an area in which they have significant expertise. The Zen Center supports itself largely with a nonprofit construction company called Our Homes, Inc.

The house has seven tenants, mostly local college students who each pay $250 a month for a room. The hall is home to four monastics, two ordained monks and two receiving their training. Each one lives in a small room separated from the rest by shijo doors, sliding doors made of rice paper and wood. The rooms line the perimeter of the meditation hall. They are sparsely furnished, most with only a mattress and a bookshelf.

The Zen Center has already been through a fair amount of repair and renovation since it was purchased in 1993 by founder Alexander Lundquist (Sahnbul Sunim), a Detroit native and former gym teacher in the Detroit Public Schools system. In 1990 he returned from Korea where he received his monastic training. He bought a house on the city's southwest side to operate a monastery. The house, however, proved to be too small and the neighborhood too dangerous. Plus, it was far from many of the nonresident members. When he found the place in Hamtramck, it seemed to suit his needs better.

"Hamtramck, you know, it's close to the freeways and it's closer to the suburbs," Lundquist says.

The meditation space was originally built in the 1940s as a Polish wedding hall. When its original owners left, it was taken over in the '70s by a commune called the Earth Center. Lundquist says that because the members of the commune had little money for basic upkeep, it began to fall into a state of disrepair. "The roof leaked, and it was a pit," he says. "It smelled terrible."

Within three years though, Lundquist, who is a carpenter by trade, along with a team of volunteers, had the buildings back up to code. The center's first major project in sustainability, the hall featured an energy-efficient heating system, a radiant-heated floor. Pipes underneath the hall's cement floor run hot water, thereby heating the room.

"You can light the boiler up once in the morning, and it will be warm for 12 hours," Moga says.

Since then, the monastery has done what it could to maintain an ecologically friendly atmosphere. They began composting. They have built most doors and fixtures with salvaged wood and metal. And, in 1999, they purchased an abandoned lot across the street and converted it into a Zen rock garden. The brick path that runs through it uses salvaged paving bricks taken (with permission) from Wayne State University's campus.

Last year, the Zen Center was tipped off to a grant program for sustainable building from the United Way's Nonprofit Facilities Center. They sent in a grant proposal in February of 2006, expecting, at best, a small construction grant to allow them to install additional insulation and new windows.

"We expected about $15,000," Moga says. They got $120,000. "We were one of seven organizations chosen to be part of a design charrette for sustainable renovation."

So, they began planning phase one of the project, which includes — along with the courtyard, green roof and replacement of their old furnace — several smaller projects aimed to reduce the monastery's use of fossil fuels and electricity. These include the installation of new triple-paned windows, the replacement of all appliances in the house with efficient EnergyStar appliances and solar thermal panels to replace a traditional water heater. In all, says Moga, the monastery plans to reduce its $1,000-plus monthly gas bill by about 50 percent.

This first phase, set to be complete in November, will cost the Zen Center about $175,000. All of the original grant has been spent or allocated. The organization is planning to begin fundraising efforts next month to come up with the rest of the money.

Future phases of the project will include an expansion of the monastery into adjacent, abandoned buildings and installation of more solar panels. Moga says they ultimately want to generate the majority of their electricity with solar power.

"Ideally, we'd like to be about 70 percent off the grid."