Wilkes, PA (USA) -- The Venerable Lama Rinchen Phuntsok, of the Nyingma order of Tibetan Buddhism will speak at Wilkes University on Saturday, September 22, 2007 at 3 p.m. in the Stark Learning Center, room 101. 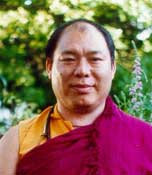 << Lama Richen will speak at Wilkes University on September 22nd, 2007.

Lama Rinchen’s talk, “Meditation and the Nature of the Mind,” is sponsored by Wilkes University and the Cultural Council of Luzerne County.

Born in Tibet, Lama Richen began his studies in the traditions of Tibetan Buddhism at the age of six when he started receiving instruction from the Tsasum Chokhorling Monastery in Tibet.

He left Tibet in 1958 and studied at Young Lama’s Home School in Dalhousie, The Buddhist Monastic School in Rewalsar, Nyingmapa Lama’s College in Dehra-Dun, and Zongdog Palri Monastery in Kalimpong.

Lama Richen also graduated from Sanskrit University in Varanasi India where he completed advanced studies in a variety of areas including Sutrayana Buddhist philosophy and scriptures, commentaries, logic, literature, history, and the major sciences of the Tibetan curriculum.

As a completion of his studies in Vajrayana Nyingma School studies, Rinchen served as a private secretary to the late His Holiness Dudjom Rinpoche, supreme Head of the Nyingma order of Tibetan Buddhism for more than fifteen years.

Lama Richen’s appearance marks the second time that Lama will teach in Wilkes-Barre. This event is free and open to the public, allowing interested individuals the opportunity to receive teachings and blessings of an authentic and devout Buddhist master.

Lama Rinchen will participate in other special ceremonies and will be available for private interviews while on campus.  For more information or reservations, contact the Cultural Council of Luzerne County at 408-4439 or cclc@wilkes.edu.