Dayton, OH (USA) -- Two Buddhist nuns, Venerable Sisters Molini and Dhamma Vijaya, are currently at the University of Dayton. They are teaching classes and sessions open to all students. 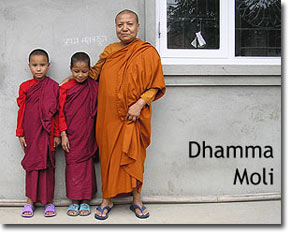 Sisters Molini and Dhamma Vijaya are from Nepal, located in South Asia. This is the third time the two have been to UD, and they will remain here throughout the semester, according to Sister Molini.

The two Buddhist nuns are team-teaching a course on Buddhism with Dr. Judith Martin on Tuesdays at 4:30 p.m. The course offers teachings of the various traditions of Buddhism dated back to 588 B.C. One example is the Theravada tradition, which the sisters come from, taught in Southeast Asia. The teachings are the original teachings from the Buddha’s time, Sister Molini said.

“Just original Buddhism as it was during the Buddha time,” she said. “We teach what he taught.”

Meditations, philosophy and history are all a part of the course.

Sisters Molini and Dhamma Vijaya are currently involved in a social activist project. In Nepal, young girls are sold to India for prostitution.

“It is the worst of war,” Sister Molini said. “The young girls get no education, no communication, they are poor, they are involved for a long time in a civil war and their parents often die while they are in India.”

The parents of the young girls often do not know they are being taken away for prostitution. Often, if a neighbor or a brother is taking care of a young girl and can no longer afford it, they sell the girl to the sex trade, Sister Molini said.

It is estimated that more than 200,000 young girls are currently involved in the sex trade in India. When the girls cannot be used in the sex trade anymore, they are sent back. Girls are often sent to a camp for girls with HIV or AIDS, according to Sister Molini.

The average age of these young girls is 8 to 9 years old.

“They are just waiting to die,” Sister Dhamma Vijaya said.

The camp project in which Sisters Molini and Dhamma Vijaya are involved is a prevention project. It is intended to protect young girls from being sent to India. By constructing a shelter for the young girls of Nepal, they are able to educate the young girls and prevent them from being involved in the sex trade, Molini said.

“We teach them how to clean, how to garden, how to cook,” Sister Dhamma Vijaya said.

The shelter is not entirely finished yet. The young girls stay on the ground floor, which includes a kitchen and a study room.

The money they obtain from teaching is put to use to construct a shelter contributing to the foundation of their project.

Sisters Molini and Dhamma Vijaya are also offering Buddhist mediation sessions from 7 to 8 p.m. every Tuesday evening in Chaminade room 102. The sessions are free and open to everybody and do not require prior registration.

On Jan. 30 and Feb. 27, Sisters Molini and Dhamma Vijaya are conducting a speech on the four basic truths to Buddhism, which are discussed in every introductory religion course. The event will take place in Sears Recital Hall.