Buddhist temple in the heart of Belmont

Rockford, Illinois (USA) -- Many times I've pulled up to the four-way stop sign at Belmont and Rogue River roads and - no matter how rushed I am - my eyes and thoughts wander to the Linh Son Temple on the southeast corner of the intersection. 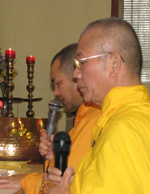 In spring and summer the landscape blossoms with greenery and flowers surrounding a tall statue of a peaceful-looking woman in the garden. "Who is she?" I've often wondered.

For the 14 years I've lived in Belmont I have been intrigued with this mysterious yellow building and the people who go there. So during our editorial meeting a couple of weeks ago at the Indy I suggested doing a story on the temple and was given an enthusiastic go-ahead.

That's one of the many facets of this job that I love: I get to satisfy my curiosity about people and things under the guise of working as a reporter, which gives me a built-in excuse to approach places that intrigue me and hope for some cooperation.

In this case, I received far more than I expected.

After working out some pesky language barrier issues, the people at Linh Son warmly welcomed me and invited me to attend their Sunday ceremony. The 45-minute service is led by a master and a monk, who sing/chant in Vietnamese.

I couldn't understand the words, but found their soothing voices calming in the light-filled temple amid candles, mild incense, a soft drum-like beat and an occasional gong.

Afterwards, I was directed to a table to sit down with the master, Thich Linh Dat, and several others, all of whom spoke varying levels of English. We talked, listened and laughed our way through the next couple of hours, which passed quickly.

The temple is run by volunteers. The board of directors includes Tan Tran, Vu Nguyen and Hong Bawden, all of whom look forward to the temple every Sunday and work to keep things running smoothly.

Buddhism, it was explained, is a religion in which followers learn to follow Buddha's path to enlightenment through clear thinking, developing love and compassion, and living a moral life (see sidebar on Buddhism). The people of Linh Son Temple practice Mahayana Buddhism, which stresses an ideal life based on virtue and wisdom.

"Buddha is teacher," said Tran. "You earn what you get. No one going to hand it to you."

"We love Buddha," said Bawden. "He's a good teacher and if we practice like him we find peace."

A brief history of the temple unfolded, starting back in the 1970s. After the fall of Saigon in 1975, a number of Vietnamese refugees settled in the Grand Rapids area.

They had endured tremendous hardships as they fled their homeland when communists took over, many witnessing unspeakable tragedies, such as the deaths of spouses and children along the way.

The Grand Rapids group pooled their money together through donations and bought the land in Belmont in 1983, at which time a small, one-room church stood on it. They used the building for their Linh Son Temple but soon found themselves with more people than the temple could hold.

In 1992, again through generous donations, they built an addition. Each time, they have sought permission from Plainfield Township officials, with whom they have a good relationship.

The Belmont temple remains the first and oldest of its kind in the Grand Rapids area, although there are now other temples near Kalamazoo and Lansing. There are more than 50 Linh Son Temples worldwide.

The Linh Son Buddhists in Belmont have approximately 400 followers, although their three major special celebrations each year bring more than 600 people. Bawden explained that a favorite among the celebrations is Vu Lan, which takes place during our calendar year in August.

"It's very cool holiday," she said. "It's a really beautiful day."

It is a time to say thank you and pay respect to parents, teachers, and others who have been influential in one's life. The release of hundreds of doves symbolizes compassion and love for animals and is a highlight of the day.

There are two other main celebrations: The Buddha's birthday (May) and the Chinese New Year.

"When I left Vietnam ... we had everything and one day it's gone. We suffer," said Dat through translators Bawden, Tran and Nguyen.

His boat was intercepted by an English ship and taken to England, where he settled until going to France in 1998 to attend Linh Son Buddhist Monastery where monks are trained. He spent several years studying as a monk before becoming a master.

"He cannot eat any meat," said Bawden, who helped translate for Dat. "He lives physically and mentally to be clean. They do not want to kill any kind of animals."

He also is not allowed to marry.

Dat lives a spartan existence at the temple in Belmont, where he has been master for five years: He spends four hours daily meditating, from 4 a.m.- 6 a.m. and 8 p.m.-10 p.m. After meditation he prays for peace in the world.

"Being a master is not easy to do," said Bawden. "You dedicate your life (to Buddhism). He wants to break the cycle of suffering."

Once a month the master leads a retreat at the temple. For 24 hours the participants learn about Buddha and live purely - physically and mentally. A strict schedule is followed and no cell phones are allowed. Small groups of college students sometimes take part in the retreats.

I looked at the master and presented a question that had been bouncing around in my head as I learned about his disciplined lifestyle.

"Do you ever not want to be a master?" I asked, wondering if he was tempted on occasion to live a "normal" life.

He smiled and kindly shook his head, no.

The people at Linh Son Temple answered my many questions with both patience and good humor. They were respectful but also animated and lively, poking fun at each other and laughing frequently. They also emphasized that they all work together as a team, and there are four ladies, in addition to Bawden, who work tirelessly preparing food for each Sunday and all of the celebrations: Hanh Ly, Trang Huynh, Cam Linh Vu and Nhan Tran.

They sent me off with phone numbers, e-mail addresses and a book, written by a Buddhist monk, explaining the religion and its philosophy.

But when I left that afternoon I walked away with more than a clearer knowledge of Buddhism. I carried with me a newfound respect and affection for these people, who have experienced so much sadness and tragedy yet still manage to find joy in life. It is a place I plan to return - not as a reporter, but as a friend.

The Linh Son Buddhist Temple is located at 2424 Rogue River Road in Belmont. Services take place at 11 a.m. every Sunday. Everyone is invited and welcome to attend the 45-minute ceremony, performed in Vietnamese, and to join in gathering afterward for conversation and vegetarian refreshments.

Author's note: A special thank you to my friends Hong Bawden, Tan Tran and Vu Nguyen for their kind and generous assistance in translating and explaining elements of the Buddhist culture. Also, thanks to Cam Linh Vu and Hiep Vu, and Hop Doan.