Ann Arbor, MI (USA) -- This weekend's visit of His Holiness the 14th Dalai Lama has excited the area's hundreds of practicing Buddhists, plus thousands of other residents interested in the theory and practices of the religion. 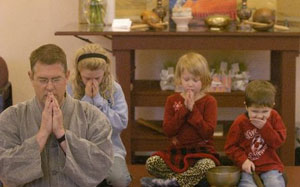 << Buddhist teacher Frank Anderson, left, leads a meditation during a service for children at The Zen Buddhist Temple in Ann Arbor on Sunday morning. Behind him are, from left, Ellery Hatopp, 9, Tigerlily Bradley, 5, and John Umbriac, 3. ELIYAHU GURFINKEL, THE ANN ARBOR NEWS

"You don't have to be a member of Jewel Heart to know he is one of the most important spiritual teachers on the planet, says Bill Zirinsky, a co-owner of the Crazy Wisdom Bookstore and Tea Room in Ann Arbor.

Crazy Wisdom, located on Main Street, serves as a hub for people interested in Buddhism and other forms of eastern spiritual teachings. Its calendar of events and list of practitioners on the store's Web site offer a road map for those interested in exploring the various facets of the religion, say area Buddhist leaders.

That puts Zirinsky, who along with his wife, Ruth Schekter, who has owned the store for 19 years, in a unique position to understand the value and perceptions of the Dalai Lama's visit.

"People who are interested in spirituality are going to be excited," Zirinsky says.
Ann Arbor has numerous informal spiritual outlets where people can learn of Buddhist practices or thought, but religious leaders cite five main learning centers where committed practitioners congregate.

Those include Jewel Heart, a Tibetan Buddhist Learning Center on Oak Valley Drive; The Zen Buddhist Temple, on Packard Street; the Deep Spring Center for Meditation and Spiritual Inquiry, on Washtenaw Avenue near Platt Road; Tsogyelgar Dharma Center, on West Liberty Road west of Zeeb Road; and the Karma Thegsum Choling Tibetan Buddhist Meditation Center on Miner Street on Ann Arbor's west side. Each center runs a variety of teaching programs and events, often stemming from the expertise of its longtime spiritual leader.

For instance, Gelek Rimpoche, who founded Jewel Heart in 1988, studied under the same renowned masters as the Dalai Lama. The two worked together in Tibet and India, and Rimpoche still helps the Dalai Lama at various events around the country.

Barbara Brodsky, who has dual roots in the Buddhist and Quaker traditions, founded the Deep Spring Center in 1989. Colleagues around the country consider Brodsky a Buddhist teacher, but she says her center embraces all kinds of spirituality. The "Deep Spring" refers to a place of deep connection and love accessed through meditation. Zirinsky estimates there are about 500 committed regular members at the five centers, but says thousands more people exist in what he calls "the body, mind and spirit community" - those interested in topics influenced in some way by Buddhism. For instance, the Zen Buddhist Temple on Packard has about 125 formal members, but over 1,000 people on its mailing list.

Zirinsky notes the many books on aspects of the Buddhist faith that have influenced how Baby Boomers and succeeding generations view matters such as spirituality, mortality, daily living and interpersonal relations.

"It has permeated our culture," Zirinsky says.

Indeed, many area people are interested in Buddhism but are not associated with a specific temple, says Haju Sunim, resident priest at the Zen Buddhist Temple.

Along with the Dalai Lama, some area Buddhists follow the teachings of Thich Nhat Hanh, a Vietnamese monk living in exile in France who has worked for peace since leaving his country in 1966, Sunim says.

Sunim said she is excited about the Dalai Lama's appearance, and is impressed with his position on the Chinese-Tibetan conflicts. "He holds to his position of being compassionate to all beings," she says. "The Chinese don't get left out.

"This is not bad guys and good guys. We are all people who need to work this out."
Area Buddhist and spiritual leaders agree the Dalai Lama's message flows far beyond the traditions of Tibetan Buddhism.

"He appeals to anybody in Ann Arbor who is interested in living life with more love and kindness," says Brodsky.

Brodsky said that the Buddha is known as "the awakened one," a state of alertness that knows no religious boundaries.

"When we see suffering around the world, we start to wake up and say, 'I am a part of this,' " Brodsky says. "One doesn't have to be a Buddhist to do that."

Sunim, who will be attending the talks along with other ordained officials, says the effects of this weekend's lectures could ripple out to the various centers.

"The people he inspires need a good place to come to," she said.