OREGON, Wis. (USA) -- Though they seem not much different from the other workers who are finishing the new temple at the Deer Park Buddhist Center, the three men working in the quiet of the temple’s basement have traveled from halfway around the world to lend their unique skills to the completion of this special place. 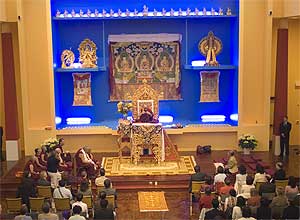 They are artists from Tibet and India, painters trained in the traditions of Buddhist artwork with its brilliant colors, charismatic deities and layered meanings.

The painters have lived on the grounds of the temple for months, devoting long days to their work and transforming the imposing temple into a showplace of Tibetan artistry.

Their hours have stretched into the evenings during these recent weeks as they race to finish before a much-anticipated visit of the Dalai Lama in July.

The Dalai Lama will visit Madison on July 19-24. He is scheduled to conduct a series of teachings as well as give a public lecture, set for July 19 at the Dane County Coliseum. But for the Deer Park Buddhist community, perhaps the most significant moment of the visit will be when the Dalai Lama conducts a special ceremony to dedicate the new temple.

This will be the Dalai Lama’s second visit to the temple, construction of which has been overseen by an old friend, Geshe Lhundub Sopa, director and abbot of Deer Park since its founding in 1979. The first visit was last year and, though the structure was complete, the temple was bare of the brilliant ornamentation, carvings and paintings that now bring it alive.

A good part of that artwork has been created in the intervening months by the three visiting artisans — Tenzin Choephel from Lhasa, Tibet; Tashi Dorjee from Dharamsala, India; and Lodoe Choedar, a Buddhist monk from Tsang, Tibet. All have been trained since their youth in traditional painting techniques.

Dorjee, in fact, comes from a centuries-old family of traditional artists, known as thangka painters for their painted silk wall-hangings. Dorjee can trace his lineage back nine generations and one of his direct relatives, Lhamo Kunga, was among those artists summoned in 1645 by the Great Fifth Dalai Lama to create artwork during the renovation of the Potala, the palace of the Dalai Lama in Tibet.

Choedar most recently lived at Sera Monastery, the home monastery near Lhasa, Tibet of Geshe Sopa. Choedar’s family, too, has a history of working in the arts. And Choephel, who speaks English and frequently translates for his friends, laughingly remembers his youthful interest in creating drawings that, initially, had little to do with Buddha.

“I was in school in India in the 10th grade,’’ Choephel said. “And in school, I liked to draw Superman and Batman.’’

Little did any of the artists know that they would one day find themselves in the American countryside, creating the art for a temple a world away from those temples with which all are more familiar. For all of them, this is the first visit to the United States.

And though all have practiced their art for years, Choephel said, this work is very special. They are aware that they paint not only to complete a rare traditional temple in the United States but also to create in the face of tragic times a lasting repository of a besieged culture’s artistic traditions and spiritual beliefs.

Choephel said all have been witness to China’s destruction of temples and the murder of monks and Tibetan citizens. Destroyed along with those temples are the works of art that are as much a part of Buddhist teachings as the ancient texts from which the old lessons of Buddhism are drawn.

Speaking of the loss of old ways and of the threat to the culture, Choephel wastes few words.

“It is facing extinction,’’ he said, standing near the artists’ paintings at the entrance to the temple. “And it is our responsibility to preserve it.’’

The artists, Choephel explained, draw their inspiration and the directions about what to paint from religious texts. Such has been the process of painting temples for centuries. In the entrance to all traditional temples, he added, one is likely to find the same artwork that now adorns the walls at Deer Park.

“Our traditions are very old and very specific,’’ said Choephel.

Throughout the temple and in many places along its outside walls are other decorative paintings completed over the months by the three artists. They have climbed and clung to tall scaffolds to paint on the high walls and sat for long hours in their makeshift basement workshop, painting in the light that slants in through the windows and doors.

They practice the slow and painstaking methods they learned as youngsters, using needles to punch intricate designs in paper stencils and then transferring the designs to wood ornament by tamping a chalk-filled bag on top of the stencil. They then use acrylics to paint the designs in the rich, traditional colors.

These days, Choephel said, they work from 8 a.m. to 7 p.m., hoping to finish in time for the Dalai Lama’s visit.

“Your eyes get tired,’’ said Choephel, 45. “And at night, when you go to bed there is always pain in your back and arms.’’

John Martens, an architect who helped design the temple and who has directed the arts project, has watched in awe as the painters ply their talents.

Their work, he said, is in keeping with the thought that has driven the project from the beginning, a belief that the temple should rise from its oak-shaded hillside as a unique blend of American engineering and traditional Tibetan design. Key to maintaining the direct link to the richness of Tibetan culture and religion, he added, is the art that is as much a part of the temple’s spiritual core as the old teachings.

“The temple is actually a manifestation of the teachings,’’ Martens said.

Or, as Geshe Sopa has written, “from the doors to the rooftops, each aspect of Tibetan Buddhist buildings has a symbolic significance, allowing visitors to encounter the Buddha’s teachings in a powerful visual form.’’

Geshe Sopa, who carries with him the knowledge of all that is being lost in Tibet, walks across the grounds of Deer Park from his residence to the temple nearly every day, visiting with the workers and the artists and sharing a moment with them as they pause to survey what they have built.

Surrounded now by the green of a Wisconsin countryside, the temple seems more than ever to be the symbol of hope and of long-lasting commitment that Sopa intended and the art that now gladdens its walls “a gift of three painters far from their families and homes” and a prayer for better times in a distant, troubled land.