Olive Township, MI (USA) -- A Buddhist congregation in Olive Township accused of past violations ranging from public urination to public assembly in an improper building is applying again for a permit to build a temple on Port Sheldon Street. 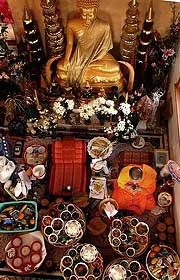 << Dennis R.J. Geppert/Sentinel file
A monk at Lao Buddhist temple chants while telling the story of Buddha’s previous lives. Temple members had prepared a large feast for the monk. Lao Buddhist temple could be one of two Olive Township temples if another group, the Aram Buddhists, get permission to build.

The Aram Buddhist Temple’s special use request to construct a hall at 12528 Port Sheldon St., which is zoned agricultural, was approved by the township board in 2005 and 2006.

Leaders didn’t build the structure before the permit lapsed and had to reapply in 2007, said Greg Ransford, zoning administrator for the township.

The township board rejected their request in the fall of 2007, citing a change in site plan specifics and the congregation’s continued violation of township zoning ordinances on the property.

“There were a lot of public safety concerns,” Ransford said.

Liravongsa said he is hopeful they will get approved. The 20-family congregation hasn’t met on the property since some members were fined in court in 2006 for the ordinance violations.

“Now we are OK,” the church member from Hamilton said, noting the group is following the law. “We are done with that.”

He explained members struggled to raise money to build the proposed structure, which caused the initial delay. They aren’t giving up, though, because they have an important goal, he said.

“We are trying to preserve our culture and traditions for the younger generation,” Liravongsa said.
Most of the problems with the township resulted from a neighbor to the east who complained to authorities, he said.

Township records show the municipality filed a complaint in Ottawa County’s 58th District Court and congregation officers pleaded guilty to violating the township zoning ordinance on or about Nov. 28, 2006.

Other non-ordinance problems like public urination and the spreading of garbage upon the premises also were cited in the document.

“Such use has been a nuisance and has adversely affected the peace, comfort, health, safety and welfare of immediate residents and existing family residential uses in the area,” it states.

If approved, the structure would become the second Buddhist temple in the township, Ransford said.

Their structure also had its special permit expire multiple times before it was renewed by the township in 2006, according to previous Sentinel stories.