Calls on schools to teach kindness

CAMBRIDGE, MA (USA) -- Arrayed before him were deans and doctors, professors and pupils, and the full range of scholars who populate the hallowed halls of Harvard. 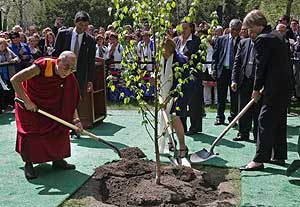 After the Dalai Lama slipped off his shoes, crammed his crossed legs into a too-narrow chair, and unceremoniously blew his nose, the world's most revered and honored Buddhist monk offered a bit of wisdom for the sages: Being smart doesn't make you happy.

During a day of high-minded events at Harvard and MIT, the 73-year-old spiritual leader repeatedly showed that he was not interested in the pomp of his surroundings.

When the crowd rose, in complete silence, as he entered Memorial Church, he said, abruptly and simply, "Sit down."

At a tree-planting in his honor in Harvard Yard, he made it clear this would not just be for show. He chastised the president of Harvard, Drew Gilpin Faust, for shoveling too little dirt on the birch sapling's roots, and once the dignitaries had done their thing, he grabbed his shovel and smoothed out the ground, and then took a plastic water bottle and liberally sprinkled its contents over the sun-drenched green leaves.

At Harvard, he flipped through a program while a group of Tibetan girls performed a dance for him; at MIT, as the Buddhist chaplain delivered closing remarks, the Dalai Lama busied himself putting on his slippers.

His day had two major events - a talk at Harvard about the importance of educating people to be compassionate, as well as intelligent, and a fund-raising event for a new institute in his name, the Dalai Lama Center for Ethics and Transformative Values, at MIT.

At Memorial Church, after being welcomed by Tibetan dancers and musicians, the Dalai Lama posed a rhetorical question, "whether education, intelligence, can bring inner peace," and proceeded to conclude that it cannot. He joked about Harvard's reputation, saying: "Some of my friends in the East once told me Harvard is so famous, even just to walk in that place is something sacred. That is too much, I think. Foolish people, or silly people, can walk [through] easily."

At another point, he observed: "There are very smart scholars, professors . . . full of feelings of competition, full of jealousy, full of anger. . . . I don't mean disrespect."

He said, as he often does, that compassionate feelings appear to be a biological component of human beings - he cited the early connection between children and their mothers - and said those feelings need to be cultivated, not only by families, but also by schools.

He noted that Buddhist monks have weathered imprisonment in Chinese prisons with less apparent psychological damage than that experienced by veterans of the Iraq war, and said, "More compassionate persons, in spite of traumatic experiences, their mental state is still calm." And he attributed some youth violence to a lack of "compassion, or affection, in family, or society."

But he suggested that "Warm-heartedness" is difficult to teach.
Discuss
COMMENTS (0)

"How to teach, I don't know," he said. "I often express these things. But how to implement, it's up to you."

At MIT, the Dalai Lama offered a mix of provocative ideas about promoting ethics in a secular society with banter and jokes that he chortled at himself.

After entering the nearly full Kresge Auditorium, where some guests had donated $1,250 or more for a pair of tickets, he kidded a Catholic monk in the front row that his head was less than perfectly shaved, unlike the Buddhist monks in the hall. Sitting cross-legged on a sofa, he recalled that he had visited a homeless shelter in San Francisco recently and told a man there that he, too, had suffered the same fate after going into exile in 1959. "I said, 'Me too, homeless.' "

His talk centered on how to achieve genuine compassion - not the kind that people easily muster for friends who share their views, but compassion for those they don't agree with.

The Dalai Lama also said the new ethics center should search for ways to help secular people build ethical values, arguing that most of the world's 6 billion people are nonbelievers who won't get ethics through religion.

He asked the Catholic monk whether secularism means rejection of religion, to which the monk replied, "that depends on your experience of secularism."

"Very wise answer," the Dalai Lama told him to laughter. "We need to promote secular ethics through education."

The Dalai Lama had some imaginative ideas for MIT scientists to work for peace.

"You could invent an injection for compassion," he said. "I would want that."

And maybe commerce could contribute: "You could have shops selling compassion. In a supermarket, you could buy compassion."

A student asked about ethics and the weapons industry. The Dalai Lama, who was awarded the Nobel Peace Prize in 1989 for his nonviolent campaign for Tibetan rights, said he hoped this would be the century for global demilitarization.

But a good start, he said, would be for institutions like MIT to invent a bullet "that misses ordinary people but hits the decision makers," waving his arm in the path of a wiggling bullet to laughter and applause. "That kind of bullet needs to be developed. Wonderful."