Stillwater, MN (USA) -- Through a grant from the Partnership Plan for Stillwater Area Public Schools, three Buddhist monks visited Stillwater's Lily Lake Elementary this week to share a sliver of their culture with students. 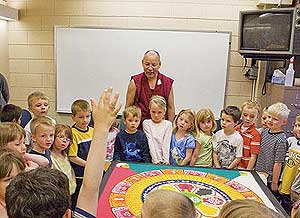 The students participated in an artist in residence project dubbed "The Mandala: A Project in Art and Diversity," in which the Buddhist monks shared how they create their culture's ancient Tibetan sand mandalas.

The monks were at the school all week working on the sand mandalas, a traditional Buddhist art form. The mandalas can take several weeks to complete and are created with colored sand poured onto a design mold.

The monks finished the project late this week, and students watched them perform a traditional closing ceremony for the sand mandala - the monks swept the sand into Lily Lake.

Lily Lake teacher Jane Dickinson, who helped organize the event, said it great way for the students to learn about a new culture.