Temple vandals know not what they do

Rochester, MN (USA) -- To those responsible for the vandalism and harassment outside the Buddhist Temple south of Rochester in recent weeks, here's a little history of which you might not be aware. 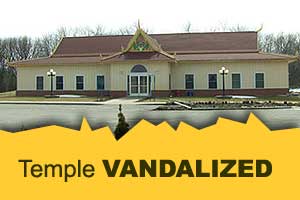 Many of the people who live or worship at the temple came to this country because they wanted a better life for themselves and their children.

For five years they suffered through what can only be described as hell on earth.

From 1975 to 1979 their country, Cambodia, was ruled by a regime called the Khmer Rouge. The Khmer instituted an extreme form of agrarian Marxism in which everyone was forced to work for the government, often in the rice paddies. Husbands and wives were separated. Children were taken away from their parents. Most lived in conditions we wouldn't tolerate for livestock.

The regime distrusted intellectuals, business people, teachers, and anyone else they viewed as a threat to them. An estimated 200,000 people -- twice the population of Rochester -- were executed. To save bullets, the executioners often used shovels and hammers to crush the skulls of their victims.

You're probably too young, but maybe you've heard of the movie "The Killing Fields." It won three academy awards and is named for the fields where the Khmer's victims were buried. Many of them were forced to dig their own graves before they were murdered.

In addition to the 200,000 Cambodians who were executed, at least another 1.3 million of them -- one-fifth of the population -- died of disease, illness and starvation.

So, you can see -- at least we hope you can -- why so many Cambodians fled the land of their birth for a better place. A place founded on the principle that on this soil we treat all people with dignity and respect, regardless of their race, gender, education level or religious beliefs.

We're not suggesting to you that the monks and others who worship at the Buddhist temple south of town should be treated with more respect and compassion than any of the other people with whom we share this planet. They don't want that.

For 30 years, Cambodian refugees, their children and grandchildren have lived among us. They are your classmates. They are your doctors and police officers and clergy people. They are part of the fabric of our community.

When you painted a cross and "Jesus Saves" on the driveway at the temple, were you really attempting to preach Christianity to a people who practice a religion you don't understand? We think not.

Please understand that when you harass these victims or vandalize their property, you are committing crimes not only against the Buddhists among us. You are also staining our community's integrity.

There's little to gain by preaching at you. We've probably done too much of that already. The challenge before us is to figure out why you think and act the way you do -- why you bully people. Are you bored? Do you feel neglected? Are you just angry?

These are among the questions we all should be asking ourselves as we attempt to deal with the ugly issues of bias and racism in and around Rochester. But here's the most important question -- What can we do to change this?

The following is a quote from The Buddha, but there are similar verses in the Bible, the Koran and most other holy books: "Hatred does not cease by hatred, but only by love; this is the eternal rule."