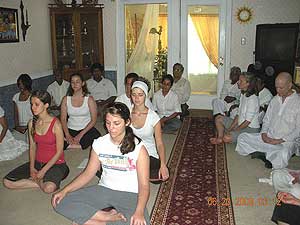 A whole day retreat, conducted by ven. M. Pannaloka and ven. N. Seelawimala under the guidance of the chief monk, Ven. T. Devananda, was held at the temple premises to mark the event.

A special ceremony was also held to celebrate the Fathers' Day. A joint speech was given by two children, Lavanya Ratninda and Dasuni Sirisuriya, highlighting the values of parents.