Madison, WI (USA) --  His Holiness the Dalai Lama’s first programme in Madison on Sunday morning was to participate in a meeting on “Behavioral and Neuro-Scientific Investigations of Contemplative Practices: Research Update” held at the Waisman Center of the University of Wisconsin-Madison. 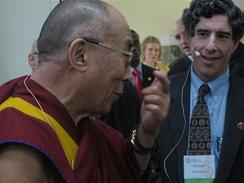 << His Holiness he Dalai Lama with University of Wisconsin-Madison neuroscientist Richard Davidson on Sunday, 16 May 2010. His Holiness is visiting to mark the opening of the Center for Investigating Healthy Minds, which is directed by Davidson/AP Photo

His Holiness’ appearance marked the opening of the Center for Investigating Healthy Minds at the University of Wisconsin-Madison dedicated to researching healthy qualities of mind like kindness and compassion.

Dr. Adam Engle of the Mind & Life Institute made a brief welcome remark. Thereafter, Dr. Richard Davidson of the University of Wisconsin, who moderated the meeting, gave an introduction.  He first showed a photo of the late Francesco Valera, (one of the scientists who had first participated in the Buddhist-Scientist dialogue) who he said provided vision for the Mind & Life Institute.  Upon seeing this image, His Holiness remarked that his impression was that while the photo showed Dr. Valera physically weak he seemed full of spirit, which showed that he had a healthy mind.

Thereafter, Dr. Richardson and three other scientists, Dr. Barbara Fredrickson of the University of North Carolina, Dr. Clifford Saron of the University of California, Davis, and Dr. Antoine Lutz of the University of Wisconsin, would be presenting recent research findings relating to human emotions.  Four scholars from the contemplative field, Ven. Matthieu Ricard from Shechen Monastery, Ms. Sharon Salzberg from Insight Meditation Society, and Dr. John Dunne from Emory University, commented on the findings and posed questions.  His Holiness the Dalai Lama shared his thoughts on the findings and made comments.  He was assisted in this by Dr. Thupten Jinpa of the Institute of Tibetan Classics.

At the conclusion of the meeting, His Holiness explained his reason for encouraging such a Buddhist-Scientist dialogue.  He said he had two reasons.  First, he said human knowledge in terms of matter was at an advanced stage and western scientists were focusing on matter.  He said he wanted the scientific research to extend into fields of Buddhist study that had lots of explanation about mind and emotion. Here His Holiness said he divided Buddhism into three categories, Buddhist science, Buddhist philosophy and Buddhist religion. He said Buddhist religion was the business of Buddhists, but that Buddhist philosophy and science had universal application.  His Holiness said knowledge of these need to be made available to a wider audience.

Secondly, His Holiness said that there was the need to change the mindset that felt that money, gun, and power would bring about happiness.  He felt that there was the need to develop concern for others and to counter the feelings of anger, fear and jealousy.  This could be achieved through compassion.  Therefore, His Holiness felt more research needed to be conducted on emotional-level problems.

His Holiness said initially in the past when science had not made much advance, people could only pray to God to resolve problems.  With the advancement of science and technological development people could find solution through these. At that stage, praying to god became less and less.  He said in the 21st century, there is indication that there was limitation to the ability of science to understand the inner world.

His Holiness said it was because of these reasons that he had been encouraging the discussion between Buddhists and scientists.  He expressed his appreciation at the involvement of the experts and scholars in this.

In a brief remark to the guests at the reception, His Holiness talked about the unique relationship between India and Tibet and how after coming to India in 1959 he had the opportunity to meet a variety of people, including scientists. His Holiness talked about the Buddhist-Scientist dialogue, which he said was focusing on four fields, cosmology, neurobiology, physics and psychology.

Governor Doyle spoke next and thanked His Holiness for visiting Wisconsin and spoke about Dr. Richard Davidson’s project. He said that meditation would be introduced to schools in Wisconsin in the fifth grade and that such education would also be extended to prisoners and veterans from war zones.  He said these would build upon the research that Dr. Davidson was conducting.