Warren, MI (USA) -- Displaying their diversity, Buddhists of various backgrounds from across Michigan and the U.S. gathered in Warren today to celebrate Lord Buddha's birthday in an event that brought together dozens of ethnic groups. 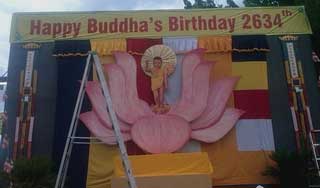 << "Happy Buddha's Birthday 2634th" read a large banner on the lawn outside Sacred Heart Monastery, a Buddhist center in Warren (By NIRAJ WARIKOO/DFP)

"Happy Buddha's Birthday 2634th" read a large banner on the lawn outside Sacred Heart Monastery, a Buddhist center in Warren. Underneath was an image of a young Buddha in a lotus flower.

The monastery was the site of a two-day conference to celebrate Buddha on a day known as Vesak. It attracted Buddhist monks and nuns from across Michigan, as well as Texas, Illinois, Iowa, Canada, and Minnesota.

There were 65 Buddhist groups in Michigan who sponsored the gathering.

"The human family is too divided," Rev. Dharmananada Bhikkhu of Hamtramck said today inside the Buddhist center. "We are all one human family and we need to come together not only as Buddhists, but everyone."

The gathering included Buddhists with roots in India, Japan, Bangladesh, Laos, Cambodia, Thailand, Sri Lanka, China, Vietnam, and from European countries as well. Each brought their own cultural traditions to the gathering, which ended today.

It was believed to be the first time in recent memory that so many different groups crossed ethnic lines in metro Detroit to mark an important Buddhist holiday, organizers said.

The gathering was called the International Conference for Peace and Vesak, an occasion to mark the 2634th birthday of Lord Buddha, as well as his day of enlightenment. It was held by the Buddhist Council of America

"We had many different people from different countries," said Shripal Fernando of Southfield. "We all felt united."

The fact that it happened to be on Father's Day added to the occasion.
"Buddha is our father," Bhikku said. "We're all his children."