WESTMINSTER, CO (USA) -- There is more of a sense of urgency now among the Laotian community to rebuild the Lao Buddhist Temple of Colorado, which was destroyed by fire in December. 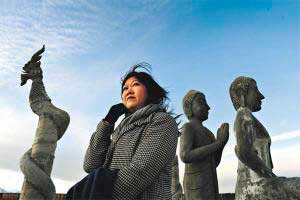 << Maly Khanthaphixay stands near statues used in New Year's ceremonies on the grounds of the Lao Buddhist Temple of Colorado, which was destroyed by fire. "It's not an exaggeration to say that the temple is our community's heart and soul," she said. (Craig F. Walker, The Denver Post)

Flames almost claimed the life of Ounkham Vuennasack, the head monk who lived there. He suffered smoke inhalation, mild burns and frostbite.

Vuennasack recovered, but two weeks after the fire, he complained of being dizzy, and doctors discovered a cancerous tumor in the right side of his brain, said Maly Khanthaphixay, whose father was among the key founders of the temple, near West 108th Avenue and Dover Street.

"We truly, truly want him to see the temple before it is too late," she said. "We want to build it for him."

The estimated cost of rebuilding could reach $600,000. Donations have been pouring in, including from Home Depot, which gave building materials, she said.

Investigators determined that bad wiring in the building, built in 1989, most likely caused the fire, Khanthaphixay said.

Many in the congregation want to build a larger temple to make a bigger gathering place for the Laotian community in Denver, which is estimated to be about 3,000 strong.

The temple has served as lodging for visiting monks, as well as homeless and visiting Laotians.

"It's not an exaggeration to say that the temple is our community's heart and soul," Khanthaphixay said.

The temple housed priceless artifacts, including a 7-ton statue of Buddha and sacred writings at least 1,000 years old. The temple is Theravadin, ascribing to the oldest surviving school of Buddhism, which is practiced by most Laotian Buddhists.

The giant Buddha statue was a gift from a Buddhist temple in Thailand and paid for by a general in the Thai army. It was melted by the fire and then almost stolen by thieves who most likely coveted it for its metals, Maly Khanthaphixay said.

It and other Buddha statues that survived the flames have been taken to an undisclosed location until a new facility can be built.

"We hope to stay for a long time," Khanthaphixay said. "This is home for us and many others who have come here for years."
TOP