Jackson Hole, Wyoming (USA) -- Anam Thubten’s habit of stripping away so much of the ceremony in the Buddhist tradition has earned him a massive following of Americans who appreciate his simple, clean message. 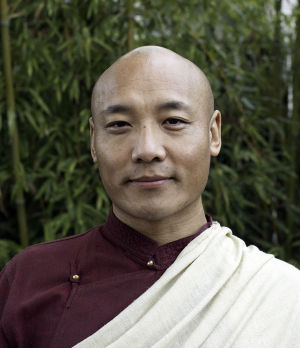 Thubten, who was raised in a Buddhist monetary in Tibet, is the founder of the Dharmata Foundation. He will lead his seventh annual Buddhist retreat in Jackson this week.

A group of young Jackson Hole Buddhists found Thubten 12 or 13 years ago, said Louise Lasley, who organizes the Dharmata Foundation retreat. He led workshops and retreats in Idaho, and groups of followers from Jackson traveled to practice with him.

Eventually the Jackson followers were able to bring Thubten to Wyoming. He has been coming ever since, and his events have grown exponentially over the years.

“I never had a registration or deposit requirement before,” Lasley said, “but the last two or three years I’ve really had to be careful about the numbers.”

She said there is room for 50 people in the retreat. A week ahead of the event it was nearly full.

Thubten is among the most popular.

“I think everyone is struck by his simple message,” she said. “It’s all about compassion and letting go of your stories and what you’ve built your life to be. You just let go of those stories and open your heart to love and compassion, and you’ll realize it’s all around you.”

The weekend of meditation and inspiring Buddhist teachings always starts off with a public discussion. The talk Friday evening at the Old Wilson Schoolhouse Community Center will give anyone interested a taste of the Dharmata Foundation and Thubten’s teachings. It’s a great introduction for people who haven’t participated in a meditation retreat before, Lasley said.

The weekend retreat is open to anyone as well, whether they are experienced with Buddhist teachings or not.

Lasley said she is surprised every year to see more and more new faces.

Thubten is a particularly inspiring Buddhist teacher for those who are new to it because the message is so clear, she said.

“Every Buddhist teacher I’ve heard is very compassionate and open,” Lasley said. “What appeals to people about Anam Thubten is that he has eliminated some of the ritual and chanting. He can be very direct with his teachings.”