Boulder, CO (USA) -- How did Boulder come to have so many Buddhists? 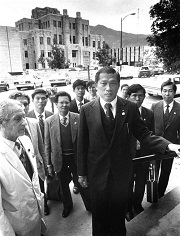 << A Buddhist leader from Thailand and his entourage visit Boulder in 1987. (Carnegie Branch Library for Local History / Daily Camera collection)

It's a question asked by a Chinese freelance journalist who recently visited Boulder and a question to ponder in advance of the Dalai Lama's much-anticipated visit here next month.

He will bring his "Compassion in Action" message to the University of Colorado campus Oct. 21-22; he last visited in 1997.

Indeed, Boulder has a long and storied history with Buddhism.

Showa Hall, was the first Buddhist Temple in Boulder County. Built in 1929 at Isabelle Road and 95th Street, the house of worship served the Japanese farmers that had settled in east Boulder County.

Buddhists were not a presence in significant numbers in Boulder proper until the 1970s. It was Tibetan Buddhism, not Japanese, that garnered a large following in Boulder.

Chögyam Trungpa Rinpoche, exiled from his native Tibet in 1959, had made his way to the United States by 1970. He traveled the country, speaking on the plight of Tibetans and the virtues of Tibetan Buddhist spiritual practice.

Rinpoche, meaning "precious one," is an honorary title bestowed on Buddhist teachers.

The University of Colorado was forming a religious studies department in the College of Arts & Sciences. Trungpa was invited by a CU professor to teach in the new academic unit.

Trungpa took to Boulder immediately. Reportedly, the Rocky Mountains reminded him of his native Himalayas.

In 1970, he established the Karma Dzong center (karma meaning action or Buddha activity and dzong meaning fortress), which was renamed in the mid-'90s to the Boulder Shambhala (a mythical kingdom) Center. The Nalanda Foundation (named after a giver of knowledge), the organization that directs Naropa Institute (Naropa was an Indian Buddhist yogi), was formed in 1974.

Trungpa invited his friend and practicing Buddhist Allen Ginsberg and a group of other poets to form a poetics department after the first summer session of the Naropa Institute.

Marpa House (for the Buddhist teacher Marpa Lotsawa), a self-described urban meditation living center on University Hill, was created in the late 1970s. With boarding house-style living and communal meals, the center features classes on meditation, Buddhism, yoga and other aspects of Eastern spirituality.

Within a short time, there were almost 1,000 Buddhists in Boulder.

Nearly all were converts, as opposed to being born into the spiritual practice.

Critics surfaced, claiming Trungpa lived lavishly at his University Hill home at 809 11th St. while preaching minimalist living for his students and followers.

A 1979 cover story in Harper's, "Spiritual Obedience: The Transcendental Game of Follow the Leader," by Peter Martin, detailed excesses and abuses and deemed the Boulder Buddhist scene cult-like.

Still, students of Buddhism and Buddhists dignitaries alike continued to be attracted to Boulder.

The Dalai Lama visited Boulder in August 1981 as part of a 40-day trip through the United States and conducted a news conference at Marpa House. In 1987, a controversial Buddhist leader from Thailand visited Karma Dzong and met with city officials.

In 1991, Lodi Gyari, envoy to the exiled Dalai Lama, while on a visit to Denver's Iliff School of Theology, made a side trip to Boulder expressly to visit Naropa, the only accredited college in the United States offering degree programs based on the Tibetan Buddhist tradition.

At the time, he was the spiritual leader of thousands of Buddhists worldwide. According to reports, he died of heart and respiratory problems after months of illness. Later, some claimed his death was the result of longtime alcoholism.

A new Rinpoche, young Tibetan monk Dzigar Kongtrul, moved to Boulder to teach at Naropa in 1990.

Separately, Katsuzo Sawada, a Japanese Buddhist, moved to Boulder in 1979 after he learned of troubles at the Rocky Flats nuclear weapons plant. Many Boulder residents

remember the sight and sounds of this monk walking the streets of Boulder while chanting and beating a drum.

Followers and seekers continue to be drawn to Boulder because of its many Buddhist-inspired spiritual, educational and lifestyle opportunities.