How Buddhist is Boulder?

Reputation is supported in some ways, not in others

Boulder, CO (USA) -- Boulder is so Buddhist. It's hard to deny Boulder's reputation as a Buddhist hot spot. It has a Buddhist-influenced (but secular) university, Naropa. In February, it celebrates Shambhala Day, in coordination with the Tibetan lunar calendar. The Huffington Post included Boulder's Buddhism in a 2009 "10 Pithy Observations About Boulder" story. 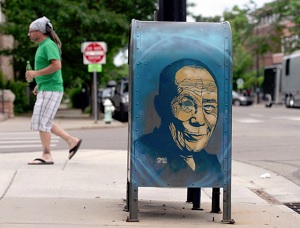 It is home to the first Shambhala city center in the world founded by influential Buddhist Chogyam Trungpa. Today, there are about 225 of his centers around the world. The Boulder Shambhala Center celebrates its 40th anniversary in its current location this year.
Advertisement

"We are very proud to say we are the largest of the city centers, too," says Melanie Klein, executive director of the Boulder Shambhala Center.

But for a relatively small city - and one the census reports is about 91 percent white - this reputation is an anomaly.

Peter Williams, of Boulder, a dharma leader and transpersonal psychotherapist who studied at Naropa, says the number of resources for people to learn about Buddhism and meditation in Boulder County is so far beyond that in Arizona, where he used to live.

"There's so much going on here. On any given night, you could probably go to 10 different meditation groups," Williams says. "It's easy to take that for granted. When I was learning to meditate, there weren't sitting groups. People just went on a retreat. That's how I learned."

Today, Williams leads a drop-in meditation group on Thursdays in downtown Boulder. He also runs retreats, one-on-one meetings and eight-month meditation immersion programs. He's one of the many local leaders on InsightColorado.org, where visitors can find a list of weekly "sitting groups" and special events.

So how Buddhist is Boulder?

There are a few insights to begin to quantify Boulder's Buddhist reputation, but they don't explain the whole picture.

First, the number of congregations.

The Boulder Shambhala Center knows of about a dozen in Boulder County, plus an additional five in Denver.

A study called the U.S. Religion Census showed that Boulder County was one of the state's top regions for the number of Buddhist congregations reported (11 to 20). Even nationwide, this number stands out, apart from mostly bigger coastal counties.

Yet despite its many congregations, Boulder County was not one of the most populous counties by percent for Buddhists in Colorado.

A Religion Census map puts Boulder's Buddhist population at less than half a percent and perhaps as low as 1/10 of a percent.

That total: just over 1,400 active Buddhists, with 18 identified congregations.

About 0.7 percent of the U.S. population (or about 2.5 million) identify as Buddhist.

Other factors to consider

Religious affiliation is tricky to measure, says Deborah Whitehead, associate professor at the University of Colorado's Department of Religious Studies.

Take the Association of Religious Data Archives' number, for example, she says.

This estimate doesn't account for how many residents might self-identify as Buddhist but not attend temple services or be affiliated with a Buddhist organization, Whitehead says.

(After all, a 2013 Gallup poll found Boulder was the second-least "religious" city in the United States. About 61 percent of Boulder residents reported they were "not religious.")

Whitehead says the census numbers may be low due to the fact that interviews were done only in English and Spanish.

"The widespread popularity of bestselling books by the Dalai Lama, Thich Nhat Hanh and Pema Chodron, for example, show that there are many more millions of Americans who 'study' Buddhism or are influenced by its ideas, but may not call themselves 'Buddhist,'" Whitehead adds.

Locally, Naropa University boasts about 7,000 alumni, and while the university is not Buddhist and many students and instructors aren't either, contemplative practices and mindfulness are an important component of the educational program, says Charles Lief, president of Naropa.

Naropa was founded by Tibetan Buddhist teacher Trungpa. And the school itself is named after a Buddhist sage.

"A lot of students stay in the region because they like it here, and that continues to then influence the work that they're doing, whatever they're doing," Lief says.

Numbers released by individual, local congregations also suggest census data and other statistics aren't the end-all. The Boulder Shambhala Center reports an active membership of more than 600 people — plus an additional 4,000 who are involved peripherally, says Klein.

That doesn't include the thousands of people who have been involved over the past 40 years who still live in the area but don't attend, she says.

"Anecdotally, I'll just be sitting around town wearing my director pin, and people will stop to say, 'I go to this other place,'" Klein says. "It's not usual to find that many people who are Buddhist as you are just moving around town."
TOP