Searching for Shammatha in Summit

Breckenridge, CO (USA) -- The room had just gone quiet when it hit. Fourteen locals, a Buddhist monk and a Buddhist nun were sinking peacefully into the world of meditation when there landed - on the tip of one local's nose - an unmistakable itch. 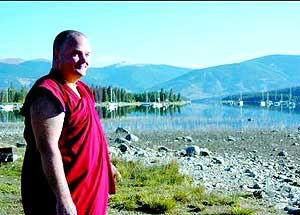 << Summit Daily/Andrew Tolve The Venerable Thomas Gutherie, a Buddhist monk with the Summit Dharma Center, is teaching an introductory course on Buddhist philosophy and meditation in Breckenridge. He stands here in the front of Dillon Reservoir Thursday.

"It wouldn't go away," the student admitted after the meditation had concluded. "It just stayed there."

At the head of the room, the Venerable Thomas Gutherie, a Buddhist monk and the leader of the session, nodded knowingly.

"You know what the Tibetans say?" he asked the group in a soft, modulated voice. "They say that at first your mind is like a wild elephant rampaging through a field with a drunken monkey leading it."

The Venerable Thomas looked calmly around the room until his gaze settled on a middle-aged man in blue jeans.

"But with time, as we learn to place our mind in one place, we bring the elephant under control," he said.

Such was the first lesson of Introduction to Buddhist Philosophy and Meditation, a course that will delve into the physical and philosophical nuances of Indo-Tibetan Buddhism. The class will meet every Monday night at the Weststar Bank Building in Breckenridge until students have ascended beyond the basics of the practice - or until "you're enlightened," the Venerable Thomas joked.

He is teaching similar classes through the Summit Dharma Center in Winter Park, the Roaring Fork Valley and Buena Vista.

"The goal of the course is to establish a basic intellectual understanding of Buddhism and to begin a daily meditation practice," the Venerable Thomas said. "Now, the goal of both of those would be to lessen your suffering, to lead a more meaningful life, to arouse compassion for yourself and for other beings."

Indeed, arousing compassion for yourself and for other beings is the central tenant of Buddhism. The philosophy encourages its practitioners to familiarize themselves with their minds, to reduce the clutter of ideas in their head down to simpler, more magnanimous thoughts.

Most importantly, it asks them to find satisfaction in what they already have.

"It's like this," the Venerable Thomas explained. "We're not quite comfortable in our own place, wherever we find ourselves. We're always looking to improve, to tweak things so they're just a little bit better - a little bit more money, a little better car, a little better sex - as though there were something wrong with where we are now."

Thomas Gutherie knows this state of pervasive dissatisfaction (as the Buddhists call it) all too well. Before he assumed the title of monk, the Georgia native was your typical Colorado powderhound, teaching snowboarding lessons in Vail for eight years and searching for powder in his free time.

"Sure it's fun," recalled the Venerable Thomas. "There's nothing like being on a big old board in a back basin in Vail. But I was like, 'What's the end result?' (Through Buddhism I've learned) to take refuge in a more lasting happiness. That rush of skiing doesn't have to be a fleeting, isolated instant."

Despite the serious undertone to Gutherie's philosophical pursuits, he kept the class Monday night light-spirited for the attendees. Regarding his southern roots, he called himself one of the few "redneck monks" in the West. When asked how one knows if enlightenment has arrived, he replied that "you get an e-mail from Buddha-net."

And when he saw that several attendees had not returned for the second session of the introductory class, the Venerable Thomas rejoiced.

"Well, evidentally the five people who came last week are already enlightened, so we're off to a good start."

For more information about Introduction to Buddhist Philosophy and Meditation, contact the Summit Dharma Center at (719) 836-3843. The class meets on Mondays at 5:45 p.m. at the WestStar Bank Building in Breckenridge, Suite 205.